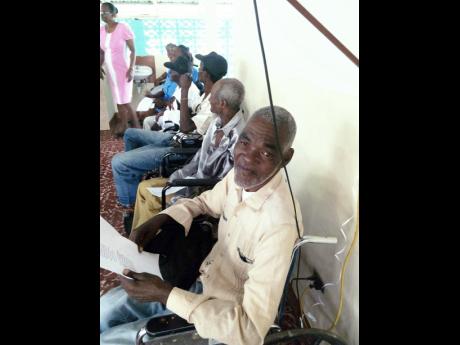 x
Residents of the St Ann Infirmary wait patiently for the start of a function.

The St Ann's Bay Infirmary - desperately in need of several household items and equipment - may have to write off the thought of ever benefiting from the generosity of a family, frustrated by the process of clearing the items.

The family says it may end up having to send back to Canada, a 20-foot container packed with medical equipment, washing machines, microwave ovens, clothes, wheelchairs and toiletries that it was planning to donate to the infirmary.

Documents obtained by The Gleaner showed that the total value of the items in the container is approximately US$35,000 or more than J$4 million.

But inefficiencies at the St Ann Parish Council, the Ministries of Local Government and Finance and Public Service have resulted in the container being at the wharf for more than a year, even as Prime Minister Andrew Holness, as recent as last month, called for greater efficiency in the public service.

Ernest Browne, in whose care the container was sent, is at a loss as why it has been allowed to be on the wharf for so long without any intervention from those who have the power to give instructions for it to be cleared, knowing very well that the items it holds are for the infirmary.

"If we had hired the container, we would be in trouble because we wouldn't be able to afford the cost. From 2015 until now, it's a disgrace," Browne lamented.

When The Gleaner contacted then assistant secretary manager at the St Ann Parish Council, Claudiah Carter, she confirmed that she was aware of the issue and said it was being worked on.

She, however, sought to explain why the container was not cleared in a timely manner.

"The customs department said we would have to get a clearance from the Tax Administration Jamaica and we got a letter from them saying the parish council did not pay a portion of income tax, emolument and so forth. That is not usually paid by our council. It is usually paid by the Ministry of Local Government," Carter said.

Commissioner of Customs Major Richard Reese said any organisation wishing to import items for charity must have a proper Tax Compliance Certi-ficate (TCC) and charity status.

"Our system runs off the TCC [status], so if they are having issue with that, it has to be sorted out before anything can be done from our end. Usually, when we get a call regarding issues such as these, we offer advice because we cannot force them to do anything, but the local government ministry should have been able to help them out," he said.

Carter said, "We have been in dialogue with the Ministry of Local Government to have the issue sorted out, but we have not received a response. so we wrote to the Ministry of Finance and Public Service, where we have been given some attention, and I am now seeing light at the tunnel," she added.

But despite the apparent 'light at the end of the tunnel', the Brownes have vowed to make one last attempt at clearing the container.

Said Beverly Browne, the wife of Milton Browne, the Canadian coordinator: "If Milton (Browne) and I get no confirmation that the container will be released next week, we will begin the process of having it returned to us and we'll give the things to needy people in Canada or send them to Africa. That's not what we want to do, but our patience has worn thin. It seems we were wrong to help the infirmary!"