‘The fight against corruption begins with you’ 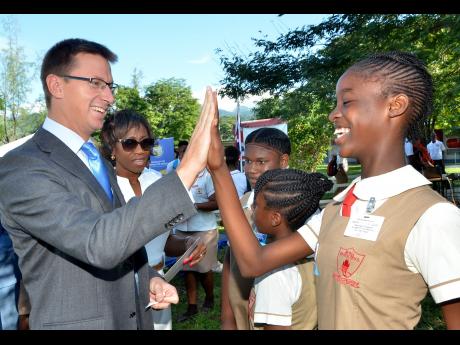 Contributed
Country Representative at the Department for International Development David Osbourne (left) high fives student of Mona High School, Renacia Thomas, after the launch of the Contractor General’s Youth Engagement and Awareness Programme at the Mona High School on Monday. In the background (from left) are Children’s Advocate Diahann Gordon Harrison and students of Mona High School, Sudene McAlmon and Tiffany Glave. 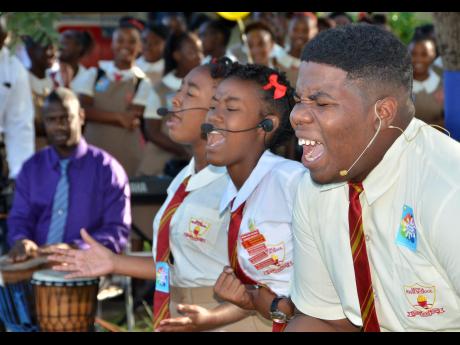 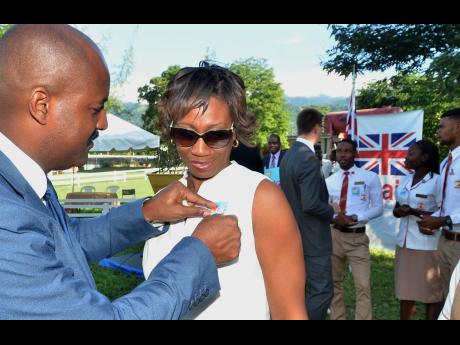 Contributed
Contractor General Dirk Harrison (left) places a ‘Youth Against Corruption’ sticker on the dress of his wife, Children’s Advocate Diahann Gordon Harrison, after the launch of the Youth Engagement and Awareness Programme, held at the Mona High School on Monday.
1
2
3

The Office of the Contractor General (OCG) and the Department for International Development (DFID) in the United Kingdom have partnered to launch a Youth Engagement and Awareness Programme, under the theme: 'The fight against corruption begins with you'.

Launched during a ceremony held at the Mona High School on Monday, the initiative marks the commencement of a series of activities to be undertaken over the 2016-2018 period.

The first year of the programme is being funded by DFID at a cost of PS88,000 (J$14 million) and seeks to educate and sensitise youth between 10 and 18 years about core ethical issues concerning corruption, fraud and conflict of interest.

In his remarks, Contractor General Dirk Harrison said the support from DFID is a reflection of the agency's commitment to youth development and to Jamaica.

He emphasised that the OCG is very passionate about the nation's youth, while noting that they should be "incorporated in our quest for long-term and sustainable change in all segments of our society".

"It is this mindset that has caused us to ensure that the youth are incorporated in our anti-corruption campaign, and we are extremely grateful for the support being given to the OCG," Harrison said.

The contractor general noted that the OCG is cognisant of the impact that an awareness and education campaign can have on the fight against corruption.

"Most important, the education campaign is as effective as the prevention mechanisms, which are passed through information sharing and increased awareness. The youth must be recognised as future leaders who, if groomed to accept certain behaviour as social norms, will perpetuate such behaviour," Harrison said.

Under the programme, preparatory, primary and high schools across the island will be visited by the OCG to do presentations of a participatory nature on anti-corruption/ethics-related issues.

A survey/programme assessment targeting 197 high schools, a select number of primary schools, community and teachers' colleges is to be undertaken.

The survey will be designed to measure views on corruption, its perception, impact, misconceptions and the realities in the Jamaican society.

An anti-corruption youth assembly is to be created from the initiative as well as the hosting of a debate competition and a song and jingle competition.

Meanwhile, Minister of Finance and the Public Service Audley Shaw said he was pleased to be associated with the initiative in the fight against corruption.

"The importance of this programme cannot be overemphasised, because Jamaica is faced with a crisis of falling standards, (which) if remain unchecked, will lead to even greater negative outcomes," the minister said.

His speech was read by Minister of State in the Ministry of Finance and the Public Service Fayval Williams.

Shaw urged every Jamaican to take personal responsibility to oppose corruption wherever it is seen, and "to encourage our children to discern right from wrong and dedicate themselves to pursue a life of excellence and honesty".

For his part, DFID Country Representative David Osbourne said his organisation has a track record of supporting Jamaica's fight against corruption.

This, he said, includes ongoing support for the Major Organised Crime and Anti-Corruption Agency, the Independent Commission of Investigations, and the Financial Investigations Division.

"We have played a small part in the incredible results these organisations have achieved, including the restraint of $400 million derived from corruption, and $1.4 billion derived from organised crime; the arrest and charge of 120 politically exposed persons and high-value targets for corrupt or criminal activities," Osbourne said.

He noted that the OCG, an independent, anti-corruption commission of Parliament, plays a critical role in delivering Jamaica's fight against corruption.

"We are delighted today to be expanding our partnership and supporting the OCG ... supporting its campaign to educate, engage and inform youth on the issue of corruption," Osbourne stated.

He added that this is critical, as corruption involves two sides - the bribe-taker as well as the bribe-giver.

"If citizens and business people offer bribes, they create opportunity. If they refuse to participate, corruption can be reduced overnight. If the youth of today reject corruption, there will be less corruption tomorrow. We hope that our support helps the OCG and its partners mobilise young people to prevent corruption," Osbourne said.