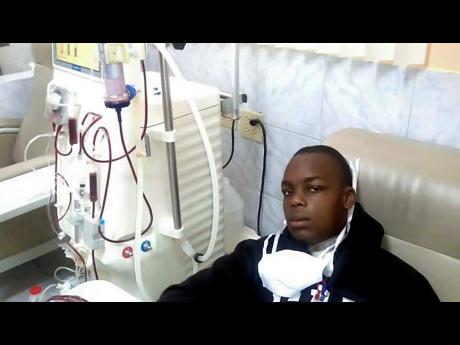 Patrick Williams celebrated his 21st birthday on Wednesday, May 10. It wasn't a particularly happy day for the young man from Ocho Rios, St Ann, but it was still one in which he nevertheless gave God thanks for several things in his life.

One thing he is praying for, though, more than anything else, is help for his medical condition.

Williams is suffering from end-stage renal disease (ESRD), otherwise called kidney failure, which is the last stage of chronic kidney disease. It means both kidneys have failed and he has had to be relying on haemodialysis to stay alive. A remedial action is kidney transplant.

Currently, Williams does dialysis treatment twice per week in Ocho Rios, with each visit costing $11,000, meaning he has to find at least $88,000 per month. It was recommended that treatment should be three times per week but that cost would be even more prohibitive.

Williams, the only son in a family of six children, first noticed a problem in 2012 when he developed severe swelling in his legs.

"He was subsequently diagnosed with nephrotic syndrome and was managed on medications and dietary restrictions to which he is compliant," explained Nicky Johnson, a nurse attached to the St Ann Health Department, and who is actively trying to assist the young man.

Johnson told Family & Religion that Williams' mannerisms and positive attitude endeared her to helping him.

She pointed out that despite his condition, he continues to work as an assistant laboratory technician at his alma mater, Steer Town Academy.

Johnson explained: "Patrick is a promising young man who is good-natured and helpful. I met him five years ago at the health centre where I work. It is very rare when young people leave such a positive impression on adults, so I kept in touch with his family and tracked his progress over the years. Things were looking pretty good until this March when he developed complications and tests proved that his kidneys have failed.

"Of course, this was a surprise to me because Patrick is a very dedicated and disciplined young man who complied with his medications and dietary restriction. I am sure you can imagine that Patrick is devastated and scared. His family has not said much. I suspect that it is as a result of fear as well as they may not totally understand the gravity of the situation. I am trying my best to help them to come to terms with his diagnosis. I knew I had to step up and advocate on his behalf because if he does not get the appropriate treatment he will die a slow and painful death."

Johnson explained that she was hoping to establish useful connections that can either aid in Williams' medical/surgical management or provide referrals to other agencies that may be able to help.

When Family & Religion spoke with Williams, he expressed gratitude to Johnson for her support over the years. At the same time, he was positive that help would come his way before it was too late.

"I just need help to continue the treatment until I can get a kidney," Williams said.