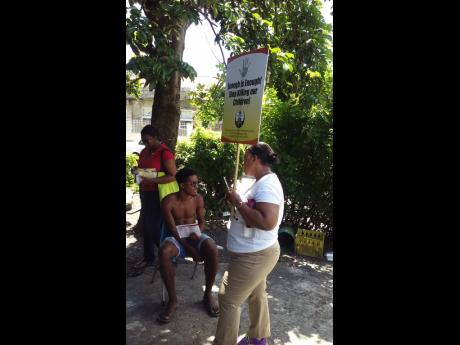 Gareth Davis Sr.
Members of the Child Development Agency and other stakeholders staging a walk through in Buff Bay, Portland, last Friday. 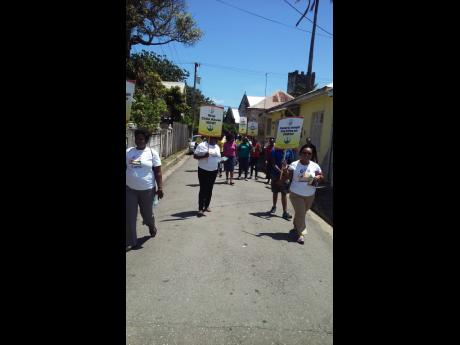 It was a positive response from residents of Buff Bay, Portland, last Friday, as they welcomed an initiative from the Child Development Agency (CDA) to educate and sensitise them about the rights and needs of the nation's children.

Chief Executive Officer of the CDA Rosalee Gage-Grey led representatives of several state agencies, including the police, on a march through Buff Bay and adjoining communities as part of 'Operation: Rescue and Restore' which is one of several activities to mark Child Month.

"We want our children in this country to grow up to be who they want to be," said Gage-Grey, as she noted that this was part of a series of walks planned to reach families who are in need of support.

"We also want to spread the message that child abuse is not acceptable and that enough is enough. We need to stop the level of abuse, because if we fail to stem it, it means that we will always to be putting in resources to solve a problem that we can prevent.

"Our aim is to go into these communities and to bring the word to persons to ensure that everybody knows their responsibility and the need to protect our children," added Gage-Grey.

According to the CDA head, it was widely felt that the agency needs to get into the varied communities to inform citizens about what they are doing, as it is the agency charged with the responsibility for the welfare, protection, and well-being of children.

Gage-Grey added: "We partnered with a number of agencies and the response from residents is a positive one, and we were able to relate to them one and one. We also encouraged parents to take better care and responsibility of their children.

"A face-to-face talk with community residents works tremendously, as was the case during this walk. Portland has not seen any large number of reports being made about child abuse; however, we suspect that there might be some under reporting taking place."

She noted that the CDA will be taking a zero-tolerance approach towards child abuse, and that special emphasis will be placed on the need for everyone, especially adults, to assist with ensuring that any incident of child abuse is reported with the utmost urgency.