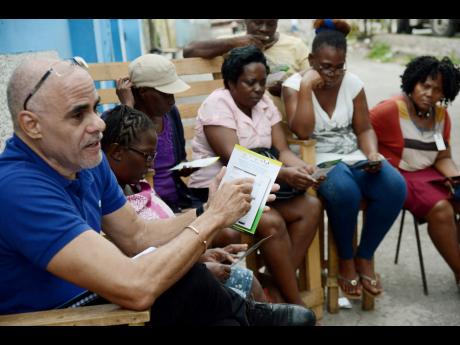 Rudolph Brown
Co-chairman of the Economic Programme Oversight Committee Keith Duncan (left) shares details of the Government's agreement with the IMF during an 'On the Corner' session in Swallowfiled, South East St Andrew, last Thursday. 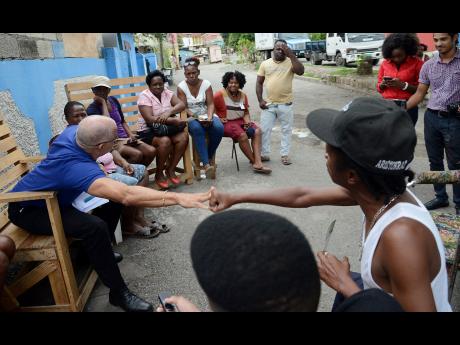 Rudolph Brown
Swallowfield resident Corey (right) was so impressed by a comment from co-chairman of the Economic Programme Oversight Committee, Keith Duncan, that he had to give him a fist bump during an On the Corner session in the South East St Andrew community last Thursday. 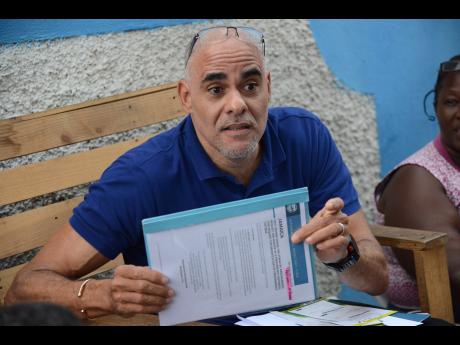 Rudolph Brown
"This is not an IMF plan, this is a Jamaica plan," is what the Economic Programme Oversight Committee co-chairman Keith Duncan emphasised while On the Corner in swallowfield last Thursday.
1
2
3

They might live in a constituency which has voted People's National Party since 1989 but the politics will not stop the people of Swallowfield from working with the Jamaica Labour Party to improve their community, but they have one demand - "talk to us".

That was the message the mostly women from the South East St Andrew community delivered to co-chairman of the Economic Programme Oversight Committee (EPOC), Keith Duncan, when he went 'On the Corner' at Annie's Bar last Thursday.

Duncan was continuing the EPOC scheme of taking details of its work to residents on street corners across the island, and while most of the men listened from a distance the women came prepared to do more than listen.

Well into his presentation of the Government's economic programme, which has been accepted by the International Monetary Fund, and EPOC's role of monitoring the implementation of the programme, Duncan pointed to the plan to reform inner-city communities to ensure their sustainable development when he was interrupted with a slew of questions.

"The plan, the measures to reform the inner city and to create amicable places for working and living and all of that, and you said this is a plan for Jamaica. My question is, the places that they are planning to develop, where is the consultation with the people?" said Pamela Munroe.

"This is to be submitted by October 2017. I don't see anybody consulting with the people. How can you have a plan to impact people like this and there is no consultation?" added Munroe.

She argued that consultation with residents of these communities is of absolute necessity, because what was written in books or on papers was not necessarily what residents there wanted.

"There can be no one-size fix for all communities," declared Munroe, as she argued that while some inner-city communities may require urgent infrastructure development as their first phase, for others it may be other types of development, such as employment for residents.

"So what is written down is not necessarily what people want. I don't understand how they are going to write something on behalf of us when they don't know our situation," declared Munroe.

As Duncan pulled out the document to share the specific details of the programme, Audria Osborne demanded to know how the Government arrived at the proposed plan, as she argued that development recommendations cannot be made behind the backs of the residents.

"You can't have these kinds of wide-scale development plan without hearing the people's voices," argued Osborne.

"What is it that the community is going to contribute? There has to be a buy-in by the community members or it will end up like the downtown (Kingston) bus shed that they spend millions to build and is not being used," added Osborne.

Duncan was quick to agree with the need for consultation as he noted that this was one reason why EPOC is going to communities.

"You are saying there should be consultation with the people. That's why we have an 'On the Corner' ... because the people say they want to be heard, they want to be part of the decision-making process, and that is a good thing," said Duncan.