Shallamar Richards - Standing in the gap for his students 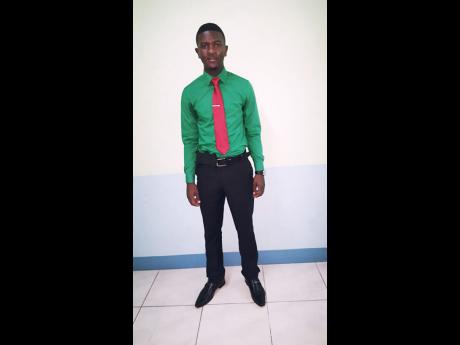 The fervent belief that too many children are growing up without a father figure in their lives is what compelled Shallamar Richards to pursue a career in teaching. Having lost his father to violence at 16 years old, he was very well aware of the effects of not having that robust male figure in the home.

Richards, who has been teaching at the Cedar Grove Academy in Portmore since 2015, says it gives him a great sense of pride knowing that he is a part of nation building.

"I became a teacher because from an early age, I would spend time teaching inanimate objects until my younger siblings came along. I also believed that many children are missing a male figure in their lives, and as such, I wanted to help by standing in that gap," he said.

Lamenting how much of a challenge the teaching profession can be, especially as a teacher of mathematics, he still finds a way to remain upbeat as a means of motivating his students. "Because my students believe in me, sometimes the sentiments echoed around the room can be very comforting. They try very hard and this empowers me to continue. I love my students and I am always trying to improve my craft to ensure that they are not being short-changed," he told Rural Xpress.

According to him, many children lack the passion of attaining an education and simply believe that they're going to school just because their parents send them. "Therefore, I try my very best to use real-life examples to show them the importance of school. I believe that at times we should sometimes utilise 'teachable moments' to get students on track. It is sometimes believed that this is the job of the guidance counsellor; however, every teacher should play a role in their students' learning of the hidden curriculum," he explained.

Richards also believes that students who are 'slow' should be readily accepted with the aim of ensuring that their needs are being catered for in the classroom. While agreeing that it will take a lot of capital, he also pleaded for a reduction in the number of students in each classroom. "This will increase our output levels far above what we can think. Too many of our students are facing issues for there to be a class with more than 25 students, and this will also give each child a fair chance at learning," he said.

For him, teachers are doing their best, but the rest is up to parents who are found lacking when it comes to their children's education.

Richards, who is originally from Royal Flat in Manchester, now lives in Cedar Grove Estate in Portmore. He attended Manchester High School and The Mico University College. "I live by the Latin quote, 'Discern, Docere, Seminare', which means 'to learn, to teach, to sow', and I will always allow my light to shine while I do things with my might," said the passionate young teacher.