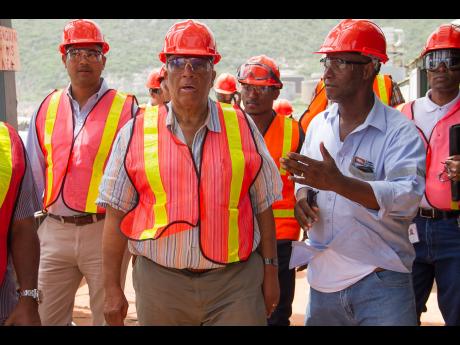 Opposition Leader Dr Peter Phillips has expressed his delight with the planned full resumption of operations at the JISCO Alpart plant in St Elizabeth by the end of next month.

Phillips and Phillip Paulwell, the opposition spokesperson on mining and energy, toured the soon-to-reopen bauxite/alumina plant last Friday, and the Opposition leader said he was heartened to see the results of the successful negotiations the People's National Party initiated as Government close to three years ago, as a means to drive growth in the economy.

While Phillips indicated his pleasure with the buzz of activity at the plant, he revived discussions surrounding employment, community engagement and environmental impact with the JISCO team.

The plant is slated to accommodate just over 1,000 employees at various levels, with 700 being Jamaican.

The Opposition leader indicated that he hoped the JISCO team also focused on employing a range of Jamaicans, including skilled and specialised labour, and would work hand in hand with locals to transfer knowledge where possible.

He reiterated the need for focus on sound environmental practices by the new stewards, and said he was happy to learn from Patrick James, assistant managing director at JISCO, of the plans already under way in that respect.

Phillips also commended Paulwell, the former minister of technology, mining and energy, for what he described as "having the foresight to seek out the new partners and negotiate a contract that stands to offer substantial benefits to the Jamaican economy".

Paulwell, in his capacity as a minister within the former People's National Party government, negotiated the release of the then Alpart from a stagnant contract and identified and established a new partnership with JISCO.

That is expected to rejuvenate several communities in St Elizabeth and Manchester, which suffered greatly with the closure of the plant in 2008.

The JISCO Alpart plant is scheduled to be fully operational by the end June, with JISCO projected to invest US$2 billion to double the existing capacity of the plant.

MPs ignore Mico’s plea for help to increase male teachers in the classrooms
Help us! - Phillips urges Jamaicans in the diaspora