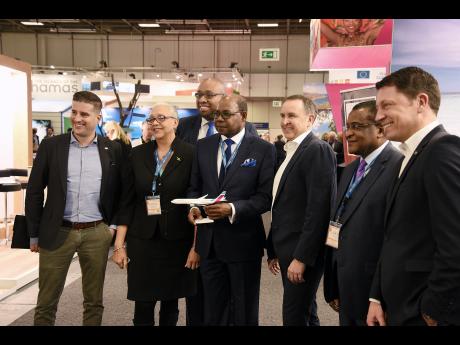 Contributed
Tourism Minister Edmund Bartlett (centre) joined by officials of one of Europe's leading airline Eurowings, and officials of the tourism ministry, share a light moment following the announcement of twice weekly nonstop scheduled flights between Germany and Jamaica.

Tourism Minister Edmund Bartlett is upbeat for the future of the sector as he expects a significant increase in new flights into Jamaica, starting today.

According to Bartlett, the new flights will add approximately 100,000 seats over the coming months, further boosting visitor-arrival numbers.

He said that Jamaica has been taking a more proactive and coordinated effort to enhance airlift as the tourism ministry and its agencies continue to drive strong increases in visitor arrivals over the coming months and years.

Bartlett noted that the new flights which start today include, "Southwest Airlines, which commences non-stop flights between Fort Lauderdale, Florida, and Montego Bay, Jamaica, adding about 1,000 news seats a week or around 52,000 new seats over the year in and out of Jamaica, and increasing connectivity to other US cities as Jamaica's tourism industry continues to grow."

Bartlett said that as a result of a targeted focus on Western Europe and driving increased arrivals from there, weekly charter flights between Spain, Portugal, and Jamaica will also begin this month.

"Those flights are sold by the Barcelo Group under their tour operator brands. The Portugal flights will be operated by Orbest from June 9 to September 29 and goes out of their capital city Lisbon, with an Airbus 330 aircraft that seats 388 passengers, representing above 6,000 new seats.

"Meanwhile, the Spain flights will be operated by Evelop non-stop out of their capital city, Madrid, into Montego Bay from June 25 to October 28 with an Airbus 330 aircraft that seats 388 passengers, representing over 8,000 new seats," added Bartlett.

He said he is also looking forward to one of Europe's leading airlines, Eurowings, a subsidiary of Lufthansa, coming to the island with a twice-weekly scheduled service between Germany's largest populated metropolitan region (Bonn/Cologne) and Montego Bay, beginning July 3.

This should represent some 33,000 new seats over the period of a year. The new scheduled service will complement weekly charter services operated by German air carrier Condor from the German cities of Frankfurt and Munich into Montego Bay.

According to senior adviser to Bartlett, Delano Seiveright: "Europe has been getting very special focus, with the minister meeting with the biggest tour operator in the world, TUI in Germany in March, connecting with Eurowings executives and meeting with Jamaica's honorary consuls throughout the continent as a means of strengthening our footprint there, and ultimately driving visitor traffic from those traditional and emerging markets as a matter of priority.

"The US and Canada will be getting more attention late summer, too."