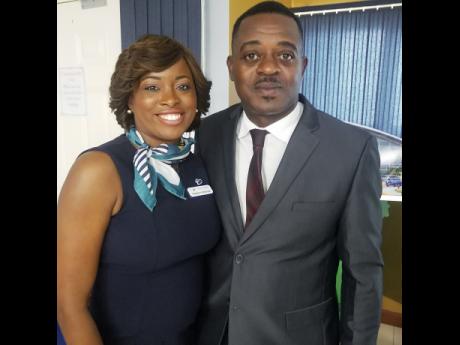 Shamere McKenzie recently captured the attention of many as she gave a heart-wrenching account of how she was trafficked and forcibly put to work as a prostitute on the streets of the United States.

She was lured into the sex-selling business after she came up short on her college tuition fees.

A past student of Westwood High, McKenzie gave her testimony during the launch of a USAID-funded University of Technology (UTech)-Fi Wi Jamaica Project and Ah Yard Communications' anti-human trafficking training programme, in association with Airline Ambassadors International.

McKenzie went to a college in the US on a full athletics scholarship, but said she was overworked by her coach and subsequently suffered a bad hamstring injury.

"I remember running 200m in practice and I pulled my hamstring," she said during the launch at the Terra Nova All-Suite Hotel in St Andrew.

"When I went back to him and said, 'I pulled my hamstring', he would say, 'Go to the trainers'. I went to the trainers and they put me in an ice bath and all their fancy stuff. Then I would go back to him. There was this race; everyone was passing me because I had an injured hamstring. The other coaches said, 'Pull her out of the race.' My coach cared about the points. At the end of the meet, he said, 'I don't know if I am going to renew your scholarship next semester'. I said, 'Coach, thanks for your scholarship, but I will not be running for you anymore'," she outlined.

She left, and from there, everything spun upside down.

A desperate Shamere McKenzie was trying to figure out how to keep herself in college when she met someone who appeared to be the right person at the right time.

"I did what other college students did - apply for financial aid - but then, I was US$3,000 short, so I decided to work," McKenzie recalled.

"One day, I went to UPS and, while crossing the street, I saw a car coming. A man came out and he extended his hand and said, 'Good afternoon, young lady'. I was, like, 'This is my type of guy because the guys in New York are usually, like, 'Yow maa, wad up?'"

He requested her number under the guise that he was interested in her, so they exchanged numbers. It wasn't long before they started getting involved in intellectual conversations that she enjoyed.

That led to her sharing certain details with him.

"We had great conversations until I shared with him that I was trying to work to get US$3,000 to go back to school. He said, 'I will help you. I have a basement apartment that I won't charge you for'."

She took up the offer.

After accepting the offer, he quickly lured her into a trap.

"He said, 'You could make more money, and all you have to do is dance.' I heard that a lot of girls danced to pay for school, so there was nothing wrong with me dancing, so I thought 'let me try it out'," McKenzie said.

She jumped into an experience of 18 months' worth of "torture".

McKenzie stressed that the violent nature of traffickers eventually let them do what they want with their victims, who usually have little hope of being freed.

"Escape? I tried that. The first time I escaped, my punishment was being sodomised."

She highlighted that millions globally experience this type of modern-day slavery, where they are not only controlled physically, but are also brainwashed and are usually moved around from place to place for the sole purpose of selling sex.

Her aim nowadays is to enlighten persons, particularly women, that anyone can end up being trafficked and could possibly end up in a worse situation than she did, so they ought to be mindful and vigilant.