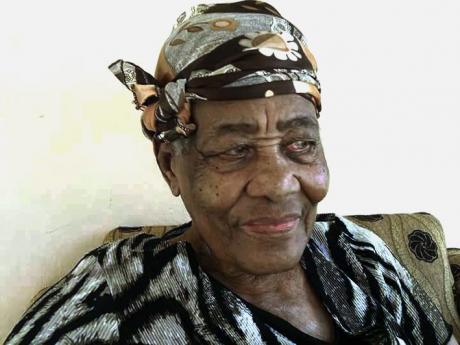 Between the two of them Ernest and Lucille Flash produced a dozen children. Thelma, born February 6, 1926, at York district in Bensonton, St Ann was the second one.

Thelma would grow up to marry Prodencia Burey, with whom she almost equalled the number of children her parents had. They were short by two, and when she died on May 6 this year nine, of her children were still alive. Her firstborn , Vance, had predeceased her in 2008, and so did her husband, in 1998. She joined them in the family plot at York on Saturday, June 10.

The girl who attended Waltham All-Age School in Bensonton evolved into a self-styled dressmaker called Tellie, Aunt Thelma, and Grandma. After she left all-age school she worked for a while as a domestic helper for a teacher Francis in Claremont, St Ann.

Yet, it was for her children and husband Thelma Rebecca Burey laboured most. She was their "doctor, nurse, social worker, homeworker teacher, comforter", and so at her thanksgiving service, she was eulogised by one of her granddaughters, Tamayo Wilson as a hard-working, dedicated mother and wife. Simple, humorous, elegant, and dignified were some of the other words used to describe the grandmother with the "infectious smile".

"To her, family is where life began and love never ended. That love she gave to all and in no small measure," Wilson told the gathering inside the Ocho Rios Baptist Church.

The "ardent member" of the Baptist community was baptised in Waltam Baptist Church at Bensonton, where she was an active member for over 60 years. In her later years when ill-health prevented her from attending church she was visited by members of the Ocho Rios Baptist Church.

The jovial, but saucy Tellie was also remembered as having "measured" and "to-the-point" one-liners for every situation. She promoted peace, no war; harmony, not conflict; respect for age and seniority, not youthful arrogance and selfishness, Wilson said.

"Simply put, Grandma was a powerful influence on her family, friends and the community as a whole."