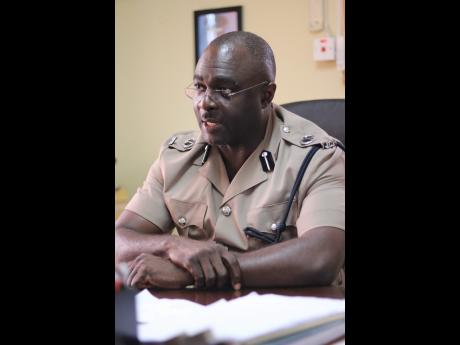 The police's bid to tame lawlessness in the Area One police division, which has churned out more than 100 murders since the start of the year, is now getting significant new resources, thanks to a joint 'Police and Military Surge,' which was recently ordered by Police Commissioner George Quallo in response to a spate of killings.

"The commissioner has instructed that a joint police and military surge be conducted effective June 16, 2017. The surge was ordered on the basis of an increase in violence islandwide and western parishes in particular," said Assistant Commissioner of Police (ACP) Warren Clarke, the commanding officer of Area One, which includes Hanover, Westmoreland, St James, and Trelawny.

Clarke said the police have done an evaluation of the crime situation and have identified a number of causative factors to include the infamous lottery scam, which has become the major source of funding criminal gangs, in terms of buying guns and the vehicles that keep them mobile.

"The violence in the west is primarily driven by inter-gang and family conflicts, reprisals and counter reprisals. Lottery scamming spoils remain a motive in some feuds."

According to Clarke, the newest initiative, which is now in full swing, is results driven and is taking a multi-pronged approach, which is geared towards disrupting criminal activities and arresting violence producers.

"The Area One Command concept of operations involves three levels of policing - (a) routine, (b) control of critical corridors or routes and (c) increased activities targeting gang organisation, aimed at arresting wanted persons (including multiple murderers) and other actors of violence, recovery of arms and returning impacted communities to normality," said Clarke. "There is a focus on public spaces, townships and known hotspots. Additional personnel have been redeployed from support areas to boost the initiative. We are confident the measures will yield positive results."

With regard to a proposal on the table to split the St James police command structure into two separate divisions, Assistant Commissioner of Police (ACP) Warren Clarke, the commanding officer of Area One, said the non-implementation, to date, is a source of much frustration.

"The lag in splitting the parish for more efficient management has been frustrating. Although a north and south divide was initially considered, subsequent dialogue with the local authority and political representative has placed the decision up for review," said Clarke.

"An east and west divide better serves the purpose on the basis of proportional distribution of policing. A St James East and St James West appropriately dissect the investigative operational burden on limited resources (especially investigators). The Eastern Divisional Headquarters should be situated in Coral Gardens or Ironshore. Instructions from the Government to divide the parish for policing are approaching a year old and must be implemented post haste."