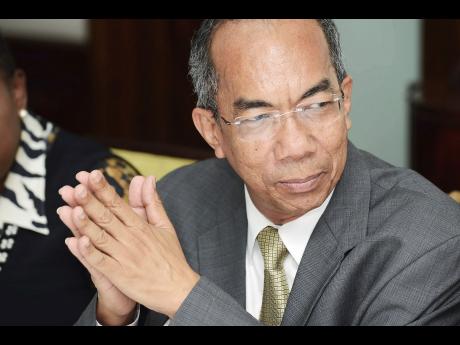 Approximately US$2 million is being spent to build 28,000 square feet of factory space in Sandy Bay, Hanover, to accommodate the introduction of a business process outsourcing (BPO) facility in the area.

Collective Solution, a BPO company with more than 200 employees now operating out of the Montego Bay Freezone, has bought the former Jockey Factory in Sandy Bay and is spending US$2 million to prepare the facility for its operation from that location. This is the third BPO site for Collective Solution, as it has operations in the Philippines (one thousand seats, and Honduras, more than 700 seats).

At Wednesday's ribbon-cutting ceremony at the new Hanover location, Executive Chairman of Collective Solution Deron Quon spoke proudly of his company being the first BPO company in Jamaica to acquire and own land in the country, adding that it shows that his company wants to invest in the people of the country; to enrich them while helping them to develop and grow.

"Our goal is to create an environment that will keep people engaged, happy, inspired and growing," said Quon.

Describing the Sandy Bay facility as the Collective Solutions campus, he added that the culture of his company is a family one, so the campus will be used to extend the company culture in sharing common values and mutual respect for each other.

Quon told The Gleaner in a subsequent interview that the retrofitting work now taking place on the Sandy Bay building should be completed by September this year. At that time, its Montego Freezone operation will be moved to the new location. He also stated that there were plans to eventually put 2,000 to 3,000 seats in Sandy Bay, possibly up to 4,000 seats, in phases.

BPO, way of the future - Chang

Dr Horace Chang, the minister without portfolio in the Ministry of Economic Growth and Job Creation, described the BPO industry as the way of the future, adding that the industry offered the opportunity for a major increase in job creation. He added that getting the operations of the new facility functional would make a tremendous difference in the economy of the surrounding communities.

Chang also stated that the Government, through the Port Authority, the Factories Corporation, and in partnership with the private sector, is on a drive to expand the number of facilities that are available for investments in the BPO industry.

"We are particularly pleased when the private sector leads the way, as is happening here in Hanover," said Chang.