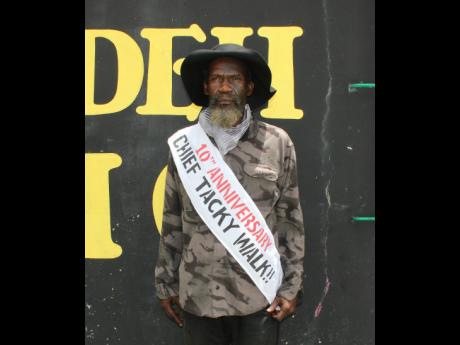 Last week, as part of an ongoing campaign to canonise Chief Tacky, the leader of the Caribbean's first civil uprising, African history advocate Derrick 'Black X' Robinson commenced a walk that will find him journeying through every parish in the country.

Robinson believes Tacky, who led the Easter Rebellion in 1760, should be recognised as a national hero, and has conducted a series of marches over the past decade to raise awareness about the significance of the uprising.

Speaking to Rural Xpress a short while after he started the walk in Islington, St Mary, Robinson said: "Today is the start of the 10th anniversary of the Tacky Walk, which advocates for Tacky to be a national hero of Jamaica. When I came to St Mary 10 years ago, I tried to look at how I could contribute to the parish.

"I did a little informal survey, and the main things people said was that Tacky should be a national hero, and that St Mary needed to be developed. So I decided to promote Tacky and use that as a platform to advance the development of the parish because when I looked at the records and understood the scale of the rebellion, the calls were justified; he should have been made a national hero long ago.

He explained: "This year, we started at Tacky Falls in Islington because folklore has it that Tacky, riding either a horse or a mule, was being chased and jumped over the falls to get away, but only the horse's carcass was found afterwards. So the falls has become very popular because of that incident."