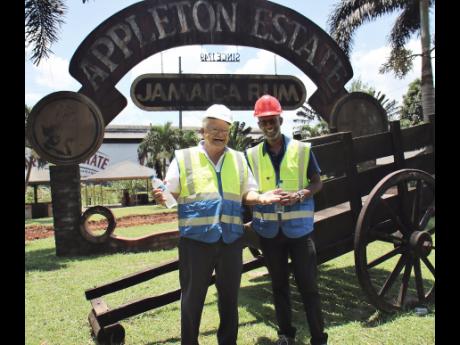 J. Wray and Nephew Limited is appealing to the Government to support its $1-billion makeover of the world-famous Appleton Rum Tour by re-establishing the old rail service and putting in a proper road from Montego Bay, St James, to its Siloah location in St Elizabeth.

"Critical to bringing people to this setting is the railway, this is our preferred form of mass transit," said chairman of the company, Clement 'Jimmy' Lawrence. "Having a railway brings an experience by itself. The rail lines, which has not been operational since the 1900s, travels between the estate and the dock from where passengers from the cruise ship arrives."

He continued, "The train would halve the travel time from the over three-hour bus ride and allow visitors to start the rum experience, while travelling to their destination. In the interim, however, it will be necessary for Government to improve the road conditions from Montego Bay to Appleton to make the journey more pleasant, ensuring that the tourist arrives unshaken."

The Appleton Rum Tour, which offered visitors an opportunity to get a first-hand view of sugar and rum production, is currently on hold to facilitate the rehabilitation work, which involves the upgrading of the existing facility and its expansion by another 25,000 square feet. On completion, the main building will include a welcome centre with a theatre, luxury bar, five-star restaurant and other amenities, which visitors can use before touring the estate's distillery and its rum-ageing warehouses.

Lawrence says he is looking to grow the number of visitors from 50,000 to approximately 200,000 annually. He believes the rail experience and the logistical benefits that it offers would support that effort nicely.

The Appleton Rum Tour is slated to resume in November under a new brand, The Appleton Estate Rum Experience.

Karl Samuda, minister of industry, commerce, agriculture and fisheries, said the Government was in full support of the world-famous Appleton Rum Tour in Siloah, St Elizabeth.

He expressed disappointment, however, that the railway service was not yet operational and says he is fully supportive of its restoration.

"From where I stand, I am a little disappointed that we have not gotten further ahead with the re-establishment of the rail between Montego Bay and Appleton, because I see that as a tremendous attraction. I am heartened by the fact that the company is refurbishing their rum tour facilities and that will be the kind of attraction that will have spin-offs for the entire community," Samuda said.

"I am looking forward to further dialogue with Appleton, as there are a number of other areas that we can discuss. They can certainly convince me to be an emissary for the company to ensure that the train is restarted."

He also revealed that Transport Minister Mike Henry is holding out for the rail to be established from Montego Bay to Vernamfield in his constituency in central Clarendon, in support of his multimodal transportation linkage vision. However, he said he and Tourism Minister Edmund Bartlett are supporting a phased approach.