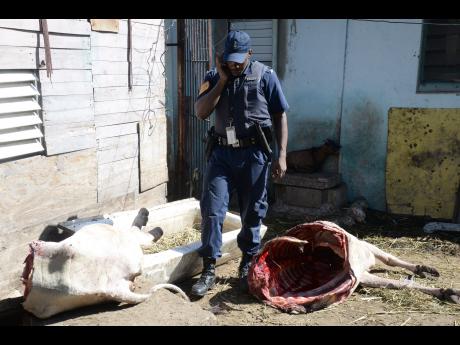 Jermaine Barnaby
Animal carcasses at the feet of a policeman at premises on Cling Cling Avenue yesterday, where a praedial larceny ring was cracked by detectives from St Thomas. 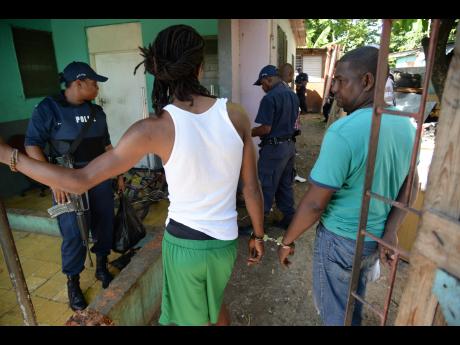 Quick work by members of a police team from St Thomas yesterday resulted in the recovery of several stolen goats at the arrest of four men believed to be part of a major praedial larceny ring which operated out of Olympic Gardens, St Andrew.

According to Assistant Superintendent Hopton Nicholson of the St Thomas Police Operations Team, early yesterday morning the police received reports that men had stolen several goats from a property in St Thomas.

"We started our investigations in St Thomas and intelligence led us to a property on Cling Cling Avenue in Olympic Gardens, where we found the carcasses of three goats, one cow and several live goats," said Nicholson.

"We took four persons into custody and we expect them to face several charges, including breaches of the Public Health Act and the Praedial Larceny Act. One motor vehicle was also seized," added Nicholson.

Since the start of this year, the police Praedial Larceny Prevention Unit (PLPU) has stepped up its operation islandwide, with several arrests and seizures.

Head of the unit, Deputy Superintendent Kevin Francis, has reported that during 31 operations across the island between January and July 2017, 83 persons were arrested, compared to 23 for the corresponding period in the year 2016.

In addition, two illegal firearms were seized, more than 380 vehicles stopped, checked and searched, and 103 breaches of the Road Traffic Act detected and tickets issued.

Three vehicles were seized and 33 stolen animals recovered, compared to 31 for the corresponding period in 2016.