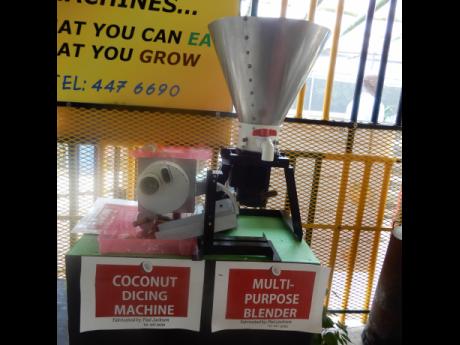 Thanks to mechanical engineer Paul Jackson, food processing has bigger and better options than using the Nutri-bullet or a blender.

His grating and coconut-dicing machines at the St Catherine Pavilion at the recently concluded 65th staging of the Denbigh Agricultural, Industrial and Food Show in Clarendon drew some attention.

Jackson shared the virtues of the creation.

"It's suitable for grating coconut, potato, cassava, carrot. It's a multipurpose blender having a capacity of five gallons," he shared.

The coconut-dicing machine is suitable for persons making coconut drops.

Jackson said he has also made a coconut husk shredding machine which can be utilised in shredding coconut husk for compost, packaging, use in agro parks and organic farming, among other benefits.

"The machines are for persons who normally do their processing manually. It will see them experiencing great reduction in processing time as a result of using these machines, especially grating coconut, cassava and potato," Jackson explained.

The machines, which he said are motorised, offer more in processing, save time with the end result being increased production.

Commenting on the catalyst for the design, he said the Denbigh Agricultural Show's theme for the last couple of years has been centred around 'Grow what you eat, eat what you grow', prompting him to think about the challenge of having affordable and suitable processing equipment and how it can make it difficult for most to eat what they grow.

"This realisation was a driving force that prompted the designs of these machines, so that quality of lives could be improved and increased production could lead to more employment," he said.

Jackson said the machines are home-made and hand-crafted.

Looking ahead, he said it is his desire to see the equipment upgraded to international standards as a Jamaican brand having the process and practice standardised in a state-of-the-art machine shop and employing young people.

Born and raised in Linstead, Jackson, who is a past student of the Dinthill Technical High School, now resides in Fairview Park, St Catherine.