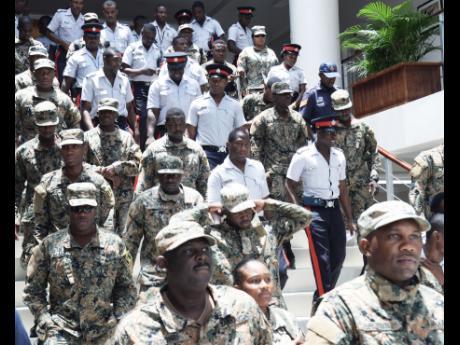 Jamaica Defence Force and Jamaica Constabulary Force members at the end of day one of their human-rights training at Up Park Camp in July.

President of the St James Lay Magistrates' Association, Claudette Bryan, says the parish’s Justices of the Peace (JPs) are willing to serve if a Zone of Special Operation is declared in the crime-plagued parish.

Bryan says while some JPs have expressed concerns, the majority are prepared to serve if called upon to do so.

Last week, addressing JPs at a sensitisation session, Justice Minister Delroy Chuck said he acknowledged the fears of some of them to serve in a zone and said such persons can opt out.

Under the zones regulations, JPs are to be present as the security forces conduct searches.

The lay magistrate can also decide if a person who is detained by members of the security forces is released or remains in custody.

Some JPs say such a situation may put their lives at risk.

But Bryan says while there is fear, most JPs are willing to play their part in the crime fighting initiative.

She emphasises that crime is out of control in St James and JPs will support avenues to bring order to the parish.

Bryan says another special zones sensitisation session is slated to be held by the Justice Ministry next week for St James and Trelawny JPs.

In the  meantime, select Justices of the Peace from the parishes of Kingston and St. Andrew, St. Thomas and St. Catherine, who will be operating in Zones of Special Operation will benefit from a Special Training Session today, at the justice ministry in St Andrew.