'The Church should be more harmonious' 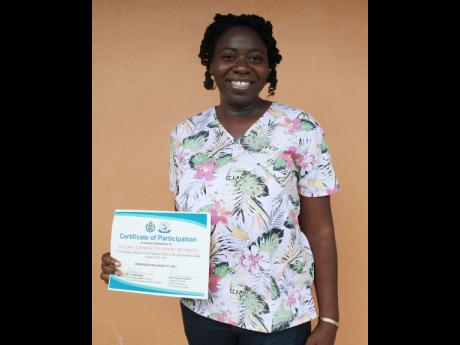 According to Smith-Bennett, the highlight of the week was a church service that helped to galvanise and bring together all of the project's collaborators and contributors in the name of Jesus Christ.

Speaking moments after the camp had finished recently, she told Family and Religion: "The camp was a good union between the youth, the police and the communities. It was really beautiful to see how people were transformed, the way they started relating to the police officers, and how they learned the messages they had been taught. Trust me it was truly amazing.

"The religious service was amazing, a really awesome turn. The camp was going well and fine, but it really made a whole lot of difference once we brought God into it because persons were just pouring out their hearts. It seems like a lot of people really needed that sermon to know that God still cares about them."

Smith-Bennett, who lives in Innswood, St Catherine, and has been a member of the Seventh-day Adventist Church for more than two decades, cites Philippians 4:13: "I can do all things through Christ which strengthens me" as her favourite Bible scripture. "I really like that one because, with God, all things are possible, and without Him, we can do nothing at all, so we have to rely on Him daily to keep us," she observed.

Moving forward, Smith-Bennett hopes to see the Church in Jamaica become more harmonious and congruent as she believes that celestial discord is the biggest religious issue currently facing the nation's citizenry.

She said: "For me, unity is the biggest problem we have because we have so many different religions and everybody wants to worship differently. What that means is sometimes it's very difficult to get everyone worshipping one God together simply because of all the different things that we practice.

"More unity would change things a great deal. It would help to reduce violence and tone down some of the criminal activities that we are seeing because we would be living better with each other and sharing more.

"I really think part of the problem is that some people are not sharing, while there are a whole lot of other people who don't have certain things, and that's one of the reasons why they divert to wrongdoings."