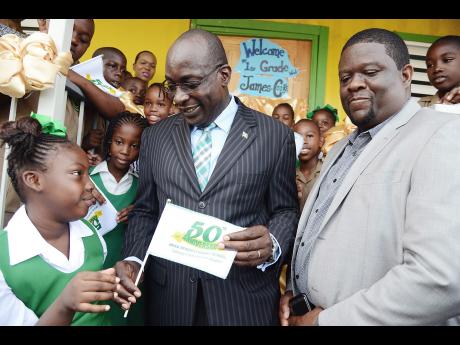 Rudolph Brown
Education Minister Ruel Reid (centre) speaks with Jada Patterson (left) while Fabian Mahabeer, principal of the Mona Heights Primary School in St Andrew, looks on during the minister’s visit to schools in Regions One and Six as the new 2017-2018 school year began last week.

School administrators are being urged to be more proactive in making their requests for furniture, bearing in mind that there is a process to be followed before resources can be acquired.

Education Minister Ruel Reid, in his response to complaints from a few schools about the inadequate number of desks and chairs, said schools must ensure that their numbers on roll reflect their capacity to manage.

"We encourage our administrators, don't wait until the last minute to make your requests. Like students with their uniform, everybody wants new uniform come the beginning of the school year, but that's not the intent. The intent is to replace furniture that requires replacing," he said.

"Not because you have old furniture that means you all need new furniture. That can't work. You need to put in your requests very early. They also need to manage their enrolment. You can't have additional enrolment above your capacity and then expect a day before, you determine what you need and expect that

the resources will come immediately. It doesn't work like that because we have to procure based on numbers."

The Gleaner reported last Tuesday that some schools were still having to make do without the much-needed furniture that was promised by the Ministry of Education, even as they welcomed students for the start of a new academic year.

In one such case, it was believed that at least two classrooms' worth of desks and chairs was required to satisfy the needs of Gaynstead High School in St Andrew. In addition, the institution was still awaiting the delivery of government-printed textbooks.

In the meantime, Reid said all the issues that contributed to delays last Monday had been rectified.