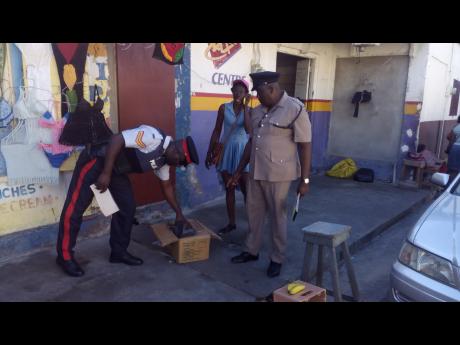 Gareth Davis Sr
Deputy Superintendent of Police (DSP) Oniel Thompson oversees the confiscation of illegal DVDs from a vendor in Port Antonio, Portland, by another lawman.

With five murders recorded since the start of 2017, Portland is regarded as the safest parish in Jamaica, but Deputy Superintendent Oniel Thompson, who heads the police team in the parish, is warning residents not to become complacent.

The eastern parish, which is renowned for its frequent rainfall and friendly people, continues to enjoy the luxury of being relatively crime-free, with a murder rate of five per 100,000 residents being far below the national average.

But despite the murder figure being 50 per cent below the corresponding period last year, Thompson said that the men and women under his command will remain vigilant, especially during the festive season, which traditionally tends to attract criminal elements from other parishes.

"The police have enjoyed an excellent relationship with the residents and business operators, who confide in us. We continue to urge residents to be on the lookout for strangers and to report any suspicious activities. We will be intensifying our operations along the streets so as to ensure the safety of all," said Thompson.

He noted that at November 11, 2017, the Portland Police Division had recorded a 32 per cent reduction in serious and violent crimes when compared to the same period in 2016.

According to Thompson, 83 serious and violent crimes have been reported in the parish since the start of 2017, with 42 or 51 per cent being cleared up.

He argued that the parish has also seen a reduction in the activity of local fishermen participating in the infamous drugs-for-guns trade between them and their counterparts in Haiti.

Thompson, however, said that the police will not be letting down their guard.

"We will also be stepping up our initiative to rid the town of Port Antonio of traffic congestion, which is caused by motorists who park illegally along the streets. It is our intention, through dialogue and with the full cooperation of the Portland Municipal Corporation and the business community, to restore public order to the town and its environs.

"No one is above the law, and those refusing to comply will be prosecuted," added Thomson.