Orvecia is waiting on a miracle to heal her heart 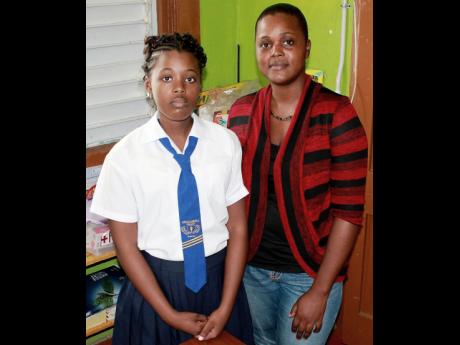 The mother of a 13-year-old schoolgirl with a life-threatening heart condition is appealing for help to pay for her daughter's urgently needed medical treatment.

Since November 2015, anguished mother Nelecia Stewartson from Huddersfield, St Mary, has been nursing daughter Orvecia Allen, who became ill with what appeared to be a simple stomach ache. However, when the pain persisted and Orvecia was taken to hospital, doctors discovered that her problem was far more serious than anyone had suspected.

Speaking to Rural Xpress earlier this month, Stewartson explained: "Orvecia did some blood tests at St Ann's Bay Hospital and when they came back, the doctor said her liver was overworking, so something must be wrong with her heart.

"He sent her to do an X-ray, which came back showing that her heart was really big, the size of a small watermelon. Then she went to do an ultrasound (echocardiogram), and the lady who did the test in Port Maria said my daughter's heart was so bad I shouldn't even let her walk across the road.

"Two days later, as we were walking on the road, Orvecia started to faint. She was admitted to

St Ann's Bay Hospital twice, and in February 2016, she was admitted to Bustamante Hospital in Kingston.

"But one day, after about three weeks, the doctors called me into a meeting to say that can't do anything because the muscle in her heart is worn out. From then, we've had issues, because we don't have the money to pay for all the medication, prescriptions, and tests that she needs."

Last year, doctors recommended that Orvecia take a blood test costing US$400, and last month, she was scheduled to do another J$15,000 diagnostic test, but her family is unable to finance all of the necessary treatment.

In spite of her tragic circumstances, Orvecia is still confident that she will pass the upcoming Grade Six Achievement Test and, ironically, is planning to become a doctor when she finishes studying.

She said: "For me, the hardest thing is to try and forget that I'm sick. I wasn't born with this and don't really know how to cope with it. I'm trying, but my mother has to always be there for me, because sometimes I break down.

"I have to take a lot of medication, so I can't come to school every day, which doesn't feel right because I can't live like a normal child anymore. I don't like taking the medication; it feels very awkward, but if I miss the important ones, I'll retain water, get woozy, and my heart will start to beat faster.

"Still, I don't think I want a heart transplant. I don't know why; I just want it to go away completely. I don't want to live like this. I don't think there's anything mankind can do to help me, so I have to look up to God. I'm just waiting on a miracle from the Lord."

For more information or to contribute to Orvecia's medical treatment, please contact her school guidance counsellor, Patricia White, on 833-3410.