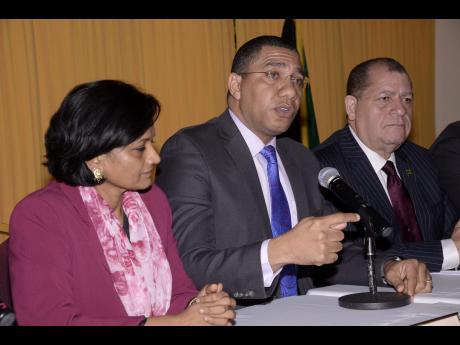 With the finance ministry scheduled to resume wage talks with teachers and the police tomorrow, the International Monetary Fund (IMF) has repeated its call for the Andrew Holness administration to speedily settle the negotiations.

The Fund has also warned the administration that its failure to reduce the public-sector wage bill is hurting its growth efforts.

"The team reiterated that wage containment is critical to release resources for the much-needed social and growth enhancing spending. More fundamentally, it is essential to make the public sector smaller, more agile and more efficient.

"The process for rolling out the early retirement programme for public-sector employees has begun, with an expected completion point of April 2018. As agreed with the authorities, it is important to calibrate this programme in such a way that long-term gains outweigh its short-term costs," added Ramakrishnan.

The IMF team was in the island to take stock of progress on Jamaica's economic reform programme supported by the precautionary standby arrangement (SBA).

This was an interim visit with no associated board discussion as the third review under the SBA is planned for February 2018, in conjunction with the 2018 Article IV Consultation.

"Despite the toll of weather swings on growth, Jamaica's unemployment rate is at eight-year low, with record high employment levels. Inflation is modest, and expectations are anchored in the medium-term target range of four to six per cent. Non-borrowed net international reserves remain above the programme target, supported by robust tourism inflows and a moderate current account deficit," said Ramakrishnan.

"The primary surplus exceeded the programme target at end September largely as a result of continued buoyant corporate income taxes. The tax revenues overperformance is being allocated, inter alia, to post-flooding repairs and national security initiatives under the supplementary budget.

"The Bank of Jamaica (BOJ) Foreign Exchange Intervention and Trading Tool is supporting sustained foreign exchange (FX) market development. The central bank has also started reducing the FX surrender requirement and is contemplating the roll-out of buy FX auctions as a more transparent and market-based approach to build FX reserves.

"The envisaged revisions to the BOJ Act including changes to the mandate, governance structure and BOJ balance sheet are critical to the shift to full-fledged inflation targeting. The IMF team also discussed the financial sector resolution framework and the way forward on non-bank regulations," added Ramakrishnan.