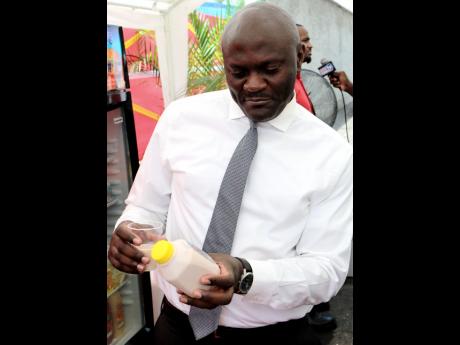 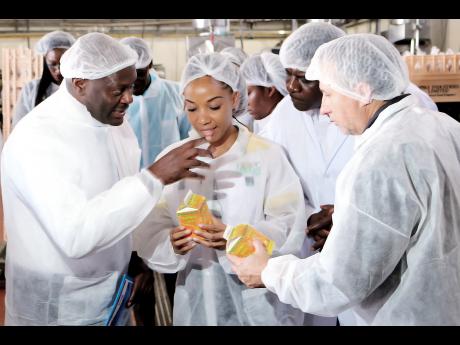 Jamaica's efforts to provide an enabling environment for small and medium-sized enterprises (SMEs) to thrive are beginning to gain traction, according to Constant Lonkeng, the International Monetary Fund (IMF) resident representative to Jamaica.

"I'm very much impressed. There is a whole process from water treatment to processing the juice and storing, exporting. The whole process - from raw material to the finished product that you want, value added," Lonkeng told The Sunday Gleaner during a tour of Spike Industries Limited's factory and processing plant at 99 Windward Road, east Kingston, last Thursday.

Lonkeng, who was been stationed in Jamaica for a year and half, was invited by the Jamaica Manufacturers' Association (JMA) join its delegation for the tour. He asked many questions and took an active interest in the operations of the facility, which sources all its water from an on-site well and is independent of the National Water Commission.

"I'm very excited to be here, to be on this tour because this is the ultimate growth driver. These guys going from raw material, including water treatment, they process the juice and then export it - that's the ultimate growth driver. Those material will be coming from agriculture so it's impressive. We want to see more of this - employment, more jobs for Jamaicans," the IMF resident representative shared.

He argued that the role of the IMF, with which Jamaica has a Precautionary Standby Agreement, has been largely misunderstood in many quarters, citing his participation in the tour as an indication of its hands-on approach to informing sustainable economic growth.

"We want to take the pulse. We want to show our support to your manufacturers. I mean that ... growth is going to happen in Jamaica, through small businesses expanding and seeking market opportunities in Jamaica and outside of Jamaica," added Lonkeng.

He told The Sunday Gleaner that the full extent of the impact of economic gains achieved through the growth of SMEs is not necessarily accurately or adequately reflected even in the quarterly reports generated by the IMF.

"It finds its way first into Jamaican households when people are feeling the income from these activities. That's what matters. It doesn't matter whether it shows up in our reports or not. Jamaicans need to feel it.

"At the end of the day, those 120 people (Spike employees), that's what it boils down to (because) there is no shortage of reports in Jamaica. You can do a report fine, but what matters to me is what income is generated out of these projects, through the multiplier effect, and then the shareholders using the profit for expansion and pushing the frontier, like they're now trying to expand," said Lonkeng.