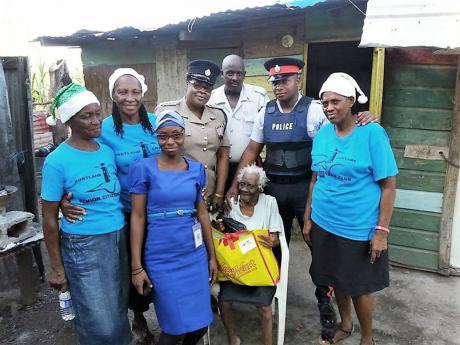 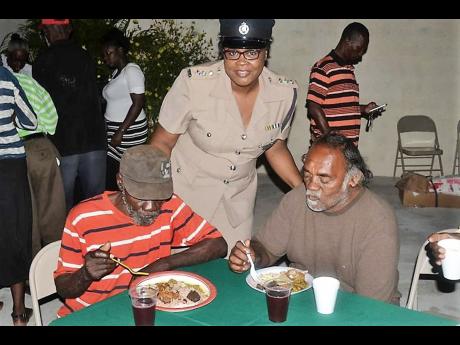 For Deputy Superintendent of Police (DSP) Paulette Baker, there is nothing like giving back to the community she hails from - Portland Cottage.

Despite being based at the Mobile Reserves unit of the Jamaica Constabulary Force (JCF) in Kingston, Baker takes great pleasure in getting actively involved in outreach efforts, especially for seniors, in Clarendon - the parish of her birth.

Last Thursday, she, along with other members of the JCF, visited shut-ins and other seniors delivering food packages, courtesy of Food For the Poor and Megamart.

"It was always my interest to give back to the community in a meaningful way," Baker told Rural Xpress. The DSP said she took that desire further by helping to form a senior citizens' club to streamline and organise activities to benefit the group.

"I was inspired to do this because of the work of my mother, Miriam Brown, who passed away in 2002. She was a caregiver and out of nothing would always go the extra mile to care for the people of her community," Baker explained.

She disclosed that her involvement with the senior citizens started two years ago. While attending the funeral for an elderly woman in the community, she heard then Councillor (now Mayor) Winston Maragh highlighting the fact that it was his third funeral for the day and that all the deceased were senior citizens.

"He indicated his interest to start something in the community with the seniors, having been reminded of Psalm 71:9 which reads, 'Cast me not off in the time of old age; forsake me not when my strength fails'," Baker recounted. Immediately after the funeral, she told Maragh of her interest to give back to the community and offered her services to support programmes to benefit seniors.

The first meeting of the senior citizens' club was held in October 2015, and the membership has been growing. Baker said the club is geared towards assisting in the motivation of the seniors and bringing awareness to the social problems faced by some of them.

"It will allow them to be actively involved in activities to boost their mental and physical capacity and to allow them to contribute to their community in meaningful ways," the DSP said.

The seniors have participated in activities that include those organised by the National Council for Senior Citizens (Clarendon Chapter) such as the National Council's parish sports championship, which the club won for two consecutive years; as well as Bible quizzes and spelling competitions, a proud Baker disclosed.

Baker is now looking forward to organising a fun day for the seniors in January. She said, because of poor sponsorship support, they had to forego the annual treat and, instead, distribute packages of food. She also took time out to thank the community and all those who offered her support to ensure the seniors received the much-needed supplies.

Baker, who joined the JCF in 1990, said she doesn't miss an opportunity to go back to her home community.