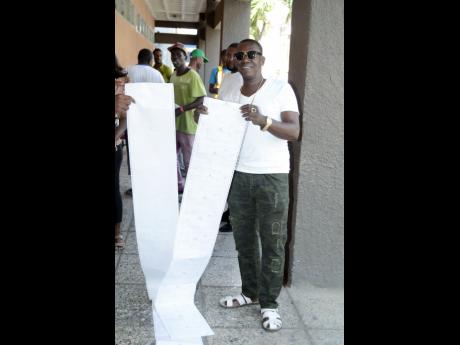 Kenyon Hemans
Donovan Sterling displays ‘a trailer load a traffic tickets’ he had picked up and was trying to pay before the end of the traffic amnesty yesterday.

Packed tax offices across the Corporate Area had mainly taxi and bus drivers who eagerly grabbed the opportunity to get a discount on the fines, with some appearing almost boastful about the number of tickets they had amassed.

Among them was Donovan Sterling, who showed our news team unpaid tickets dating as far back as 2007, and when laid in a row stretched almost 30 feet. Several of them had an $800 fine.

"Sometimes you swing from out of a pothole and straight into the police. They see it, but you can't tell them anything," he said, adding that if the roads were better he would not mind paying the tickets.

Sterling paid a total of $135,000 in fines which would have been doubled without the amnesty.

'Sick and tired of them'

For Clifton Wright, who paid $40,000 for 12 tickets, the police should stop targeting the drivers of public passenger vehicles.

"Police don't look for gunman like how they look for taxi drivers and busmen. A sick and tired of them, man," said Wright.

Last Friday, Tax Administration Jamaica (TAJ) reported that it had collected approximately $86 million in outstanding traffic fines and processed approximately 51,000 tickets since the start of this phase of the amnesty on November 27.