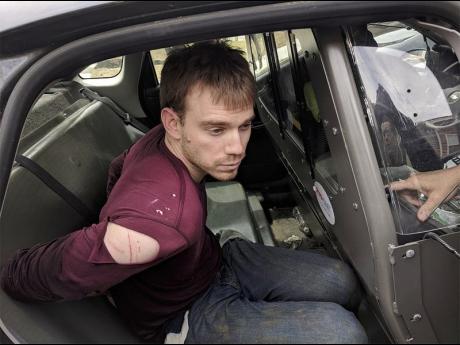 NASHVILLE, Tenn. (AP) — The suspect in an attack that killed four people at a Waffle House restaurant in Tennessee was arrested Monday not far from his apartment, police said.

Authorities had mounted a massive manhunt for 29-year-old Travis Reinking, after the Sunday morning attacks, in which a gunman clad only in a jacket used an AR-15 rifle to kill four and injure others.

Metropolitan Nashville Police announced Monday on Twitter that he was taken into custody not far from his apartment.

Photos posted by police in Nashville showed Reinking clothed and in a police car.

Reinking, described as a white man with brown hair, opened fire with an AR-15 in the Waffle House parking lot and then stormed the restaurant shortly after 3 a.m. Sunday, police say.

Four people were killed and four others were injured before a quick-thinking customer wrestled the assault weapon away, preventing more bloodshed. Reinking then disappeared, police said.

Police say about 20 people were in the Waffle House at the time of the shootings.

They included people of different races and ethnicities, but the four people killed were minorities - three black and one Hispanic.

He was considered armed and dangerous because he was known to have owned a handgun which authorities have not recovered.