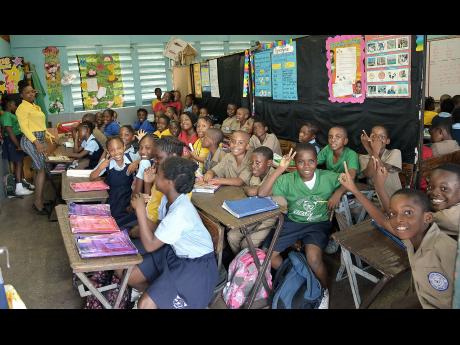 Ian Allen
One of the crowded classrooms at George Headley Primary School in St Andrew. 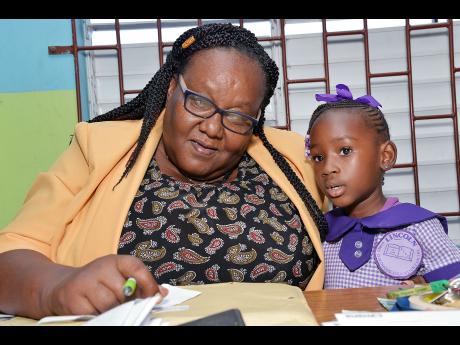 Ian Allen
Veronica Gaynor (left), principal of Iris Gelly Primary School with one of her pupils.
1
2

A directive from the Ministry of Education for primary schools to immediately begin reducing teacher-pupil ratio to 1:25 has left some administrators fuming as they say this is impractical.

The administrators note that some schools now have one teacher to 50 students, and to immediately cut that in half will be an almost impossible task.

According to a Ministry of Education advisory sent to primary schools in Region One, the decision to move the teacher-pupil ratio to 1:25 "is to ensure that you are fully supported to reduce the achievement gap within our system".

Schools were asked to apply in writing for teacher support based on their staffing and enrolment data, with the advisory noting that teachers employed under this arrangement will be temporary until the posts are formally established.

"Where you do not have the physical space to accommodate the added teachers or to separate your classes, please be mindful of these limitations before you decide to request additional staffing," the ministry further advised the schools.

But at the George Headley Primary School where several of the classrooms are already separated by chalkboards, principal Aretha Willie believes additional classrooms will be needed to ensure that the target ratio is achieved. The school has more than 1,300 students enrolled.

"The 1:25 policy is going to be good, but it is going to be a costly venture for us as a school. We are very, very short on space. We made request since I came here four years ago for additional classrooms to be built (but) to date, the ministry has not responded in a very positive way so I am stuck with the physical plant that I have now," said Willie.

NO WORD FROM MINISTRY

She noted that although the ministry has committed to providing support for the hiring of extra staff, nothing has been said about providing funding for additional resources like desks and chairs for the teachers.

"I have to look at the staff bathrooms because I have more teachers now. I am going to have to look at staff parking, because I am sure that if I bring in 10 new teachers, there must be at least two or three in the group who are drivers, so there are many things to consider," added the Willie.

She told our news team that while the school's average class size is 42:1, there are classes where a teacher has as many as 50 students.

"It's hard. It's hard mainly because most of our classrooms are divided by chalkboards. So it's 42 on one side and 42 on the other side in one space," she said.

Over at Iris Gelly Primary School, principal Veronica Gaynor said that while she will not have too many challenges implementing the 1:25 ratio, this is not necessarily the case for some of her colleagues.

"We don't have physical space to accommodate more classes, but what the ministry has said is that what we could probably do is practise team teaching, so two teachers would actually be in one class with the 40-odd, etc, but it is just that the ratio will be less," said Gaynor.

"Most schools don't have the physical space. I think we are one of the better schools in terms of spacing, because we have single classrooms, we are not into the blackboard partitions. So in terms of physical space, we might have more than an ordinary primary school," added the principal of the Arnett Gardens-based institution.

She said that the new policy presents an opportunity to employ specialist teachers, such as those who teach music and dancing.

Currently, the school's average class size is 48:1, but Gaynor reduces the pressure on the teachers by selecting students from each class to attend music, reading and other classes at intervals.

"Sometimes it is depressing. Sometimes a teacher might be ill and there is nobody to fill in. If a teacher is ill, the class is shared, so you might find a teacher on any given day when another person is ill or has to be absent for any reason at all, a teacher might have 70," said the principal.

Principal of the Jessie Ripoll Primary School, Oneil Stevens, believes that the policy will have to be implemented over time as staffing and other elements of the proposal will have to be reviewed.

The school has 900 students enrolled, while the number of teachers varies from 32 to 34.

"We understand that the ministry has a vision and we agree with that vision," said Stevens.

The education ministry has since told The Sunday Gleaner that the 1:25 policy was introduced at the beginning of the year and applies to all public schools at the early childhood, primary and secondary levels. Before this, the established ratio was 35:1.

"The ministry is willing to provide the teachers that are required. As we build out the infrastructure, there may be some classes with two teachers. Just to note that over 600 of our primary schools do have additional space, so new classrooms will not be an issue for 99 per cent of the primary schools," the ministry said in an emailed response to questions from our news team.