Religion & Culture | The psychology of identity: How could you be black and Christian? Pt. 1 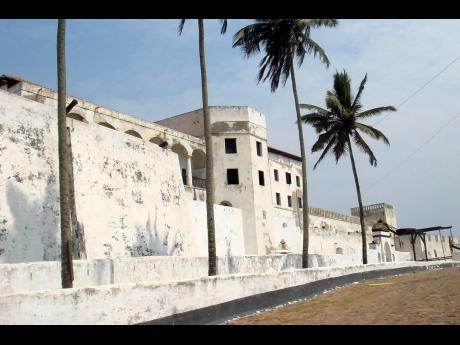 Contributed
The infamous Point of No Return, the Cape Coast Castle constructed on the shores of Ghana centuries ago. 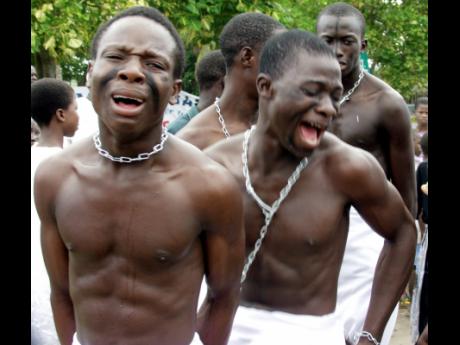 Voice Photo
In this August 2002 photo persons with chains on their necks, re-enact the days of slavery in slave port town of Badagry, south-west Nigeria.
1
2

You never know what the day brings. It is 7 a.m. and I am sharing a few photos with a trusted friend, photos I received from Ghana.

He stared at them, intently. There was one photo that stood out, for good reason. It showed a white edifice constructed on the shores of Ghana centuries ago.

It is no mere building. In its basements were slave dungeons that, over time, had held millions of captives before they were shipped to the Americas.

More appalling were the building's upper tiers that held administrative offices and a giant rectory. Yes, a rectory, the home of priests and bishops.

Mind-boggling, this was a picture of the infamous Point of No Return, the Cape Coast Castle, just one of 40 similar buildings.

And I remember the words of Jesus: "Go into all the world and preach the good news to everyone." But for millions, 'the good news' was synonymous with death.

My friend of many years, who is Jewish, looked at me and uttered: "How could you be black and Christian?" I paused, unable to render an immediate response. We parted ways but I laboured on the question.

I sat over a cup of tea a few minutes later and ruminated. I understand the Jewish experience.

The Holocaust they call it. Genocide. Millions murdered. Unconscionable. A crime against humanity. The Jews responded by closing ranks. Their Jewishness intact, they resisted conversion, even reclaiming Semitic names, so they could forget a Europe that was so unkind. My Jewish friend was on to something.

But slavery, more than three centuries of it, is a death march; an existential decay that could last generations.

But somehow, we survived, but with different names and culture, and a new saviour. A saviour whose name was invoked to pillage, rape and describe people as chattel.

Alas, there is an indescribable power that the promise of salvation wields on the human mind. It bends it to its will. Centuries of systemic conditioning can do strange things to people.

Hours later, I am sitting in the lobby of a health facility in New York. A group of black Christian volunteers began praying, invoking repeatedly that name (Jesus) before leaving to minister to the sick. That haunting question set off sirens in my head: How could you be black and Christian?

And I shook my head, for blacks are still stumbling. And I recalled comments made by a concerned citizen responding to a reporter's question on inner cities: "You go from Cicero to Central in Chicago - a one-mile stretch - and you could find 30 churches."

But there is no let-up on disaffection, crime and poverty. Many are caught in spiritual webs wove by flamboyant, persuasive preachers.

But who was I kidding? I was raised in that faith and very thankful for my religious upbringing. I would have it no other way. And although I have moved on, never have I converted.

And who am I to deny displays of Christian charity and love? How could I not be thankful to the men and women of God who, risking life and limb, resisted slavery and the evils of Jim Crow? With my thoughts I struggled.

As the invocations of the volunteers ended, I began to read The Loneliness of a Caribbean Philosopher by Jamaican scholar, Earl McKenzie, and therein are striking words.

As he pursued philosophy early in his career "(he) knew of no past Caribbean thinker who had left a record of reflections on metaphysical, epistemological, logical and moral questions". And he cites the inimitable Bertrand Russell, who once said that philosophy frees the mind from "the tyranny of custom".

Yes, only if we could, during days of wretchedness, have planted the first philosophical seed. Maybe, things would have been different.

For sure, reason and critical analysis would have become part of our religious discourse. Maybe, we would have questioned our suffering and the nature of God, and truth, and morality. And we might have rejected Christianity, if not religion as a whole.

But slavery's brutality and cunningness never granted us the luxury of philosophy.

So here we are. Christians.

And I heard that searing question again: How can you be black and Christian?

And forgive me for quoting at length an excerpt from Marc Jacobs' What a friend we have in Jesus, the most provocative book I have critiqued. Words here ring true, so true:

"At the bottom of this holy church were dungeons and pens where the African captives were kept in chains before being led out kicking, screaming and hollering to the boats that would take them away from Africa to a new world of cultivated horror ... As they like to say, and some still say today, we brought you here to civilise you.

"And there are stairs leading from this church to the dungeons below but there is one special stairs. After dark, the earthy disciples of Jesus descended these special stairs into the dungeon below the pulpit and pews ... where those women were chained, and they raped those women captives whenever the spirit moved them ... and on the seventh day, these disciples did not rest, and when they were done, they would ascend that special stairs back into the holy house to worship and sing praises to Jesus."

And the question: "How could you be black and Christian?" began pounding in my head and I struggled to answer, to make sense of it.

And I opened Jacob's book again. And before me was counsel, crystal clear:

The day wore on. And so did that question: "How could you be black be Christian?"

More on this difficult question next week.

- Dr Glenville Ashby is an award-winning author and columnist. His new book, 'In Search of Truth: A Course in Spiritual Psychology' is now available at Amazon, iBooks and Barnes and Noble. Feedback: glenvilleashby@gmail.com or follow him on Twitter@glenvilleashby