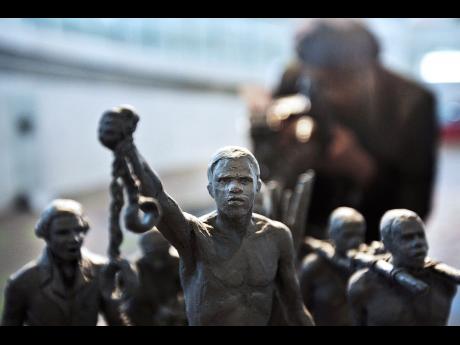 File
A maquette of a statue, at City Hall, London which stands as a permanent slavery memorial.

In his seminal works, Black Skin White Masks and Wretched of the Earth, Fanon describes the psychic brutality that racism unleashes on both the oppressed and the oppressor.

Born in Martinique, he used colonised Algeria as his template to better understand the dynamics of race, identity, and liberation. It is from Black Skin White Masks that many of his indelible quotes are culled.

Identity for the oppressed is always an almost indefinable and perplexing concept. Stripped of his worth and in the throes of an existential crisis, he must salvage what's left of his ego. He reinvents himself or adapts to the role he is given by an outside structure.

He added that the colonised is elevated above his jungle status in proportion to his adoption of the mother country's cultural standards.

Slavery and racism destroy the ego and leaves the victim scrambling to heal and find relevance. Hegel's ontology does not exist for blacks, at least in Fanon's reality.

"Colonialism," Fanon writes, "is not satisfied merely with holding a people in its grip and emptying the native's brain of all form and content. By a kind of perverted logic, it turns to the past of the people, and distorts, disfigures and destroys it."

And of imperialism, his words were equally acerbic: "Imperialism leaves behind germs of rot which we must clinically detect and remove from our land but from our minds as well."

On religion, Fanon is unswerving: "I speak of the Christian religion, and no one need be astonished. The Church in the colonies is the white people's Church, the foreigner's Church. She does not call the native to God's ways but to the ways of the white man, of the master, of the oppressor. And as we know, in this matter many are called but few chosen."

Under this kind of psychopathological assault, the oppressed must protect his ego with what Sigmund Freud called defence mechanisms. One such mechanism is sublimation of which religion is the perfect example.

Religion anaesthetises the fractured ego and to this day, it is the oppressors' best tool to rob a people of reason and the will to resist. Interestingly, today, the oppressor comes in all colours and shades.

Paulo Freire's Pedagogy of the Oppressed very much echoes Fanon's work. Freire states that the interests of the oppressors lie in changing the consciousness of the oppressed, not the situation which oppresses them.

Again, once that consciousness takes on a religious, transcendental bent, the oppressed is fair game for the kind of political and economic manipulation that we see played out in former colonies.

This is why religion and identity in the Caribbean must be revisited by the region's philosophers, psychologists, psychiatrists, sociologists, and educators.

Simply supplanting Christianity with Afrocentric religions, while perceptually encouraging, does little to address the identity question. Replacing one institution with another cannot bring healing to the ego and true independence.

If only it were that simple.

A black God or a black Saviour still leaves us looking outward for salvation. Self or identity cannot, and should not, be defined, or fashioned, by outside markers.

The drive to be creative, to realise our potential and thereby advance society, are internally based.

This brings us to the timeless call to enlightenment: 'Man know thyself'.

'Thyself' signifies the uniqueness of the experience. My enlightenment is an individualistic, unique reality in the same way the realities celebrated in scripture are unique to its sages, apostles, holy men, and villains.

Unfortunately, their realities, products of their own psycho dynamic experiences, are foisted upon us as truths; surely their truths, but not necessarily mine.

Clearly, our individual spirit, our path to our enlightenment, is hijacked by religious institutions.

Through a deliberate and detailed process of self-analysis, we must work towards our own realisation that is distinct from the collective. This is identity in its truest sense. And this authenticity is unattainable inside the walls of institutions.

So, to answer my friend's question: How could you be black and Christian?

While I could base my answer on the painful fact that Christianity's teachings and actions are difficult to reconcile (especially for blacks and indigenous peoples), I prefer to argue that the Church presents the greatest barrier to growth.

My response transcends race and Christianity. It is really an indictment on all religions by virtue of their very constitution. Fear of breaking free from the deftly designed mental siege called religion is far greater than escaping from the plantation.

It was Heraclitus (530-470 BC) who popularised the philosophy of becoming. It advances that ideas, concepts, new realities, new experiences are part of the evolutionary patterns of life. These we cannot experience within institutions that present a priori assumptions as truths.

Christianity, and its hierarchical construct, its fantastical tale of creation, and its apocalyptic, eschatological, and salvific dogmas - all without evidentiary basis - cannot forever quiet the natural impulse to think, reason, analyse, and ultimately evolve.

And to my friend's question, what irony that it is from the Bible that I find my answer: "When I was a child, I spoke as a child, I understood as a child, I thought as a child: but when I became a man, I put away childish things."

- Dr Glenville Ashby's new book: 'In Search of Truth: A Course in Spiritual Psychology' is available at Amazon, Barnes & Noble and iBooks. Feedback: glenvilleashby@gmail.com or follow him on Twitter @glenvilleashby.