SECTORAL PRESENTATIONS 2018-2019 - Excerpts from the presentation by Julian J. Robinson, opposition spokesman on science and technology 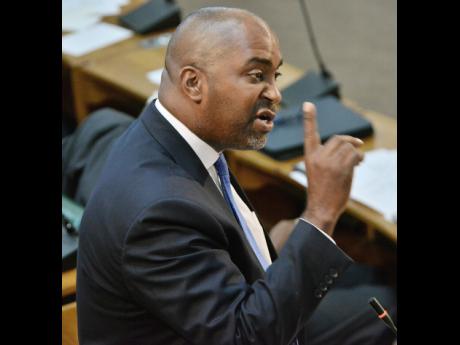 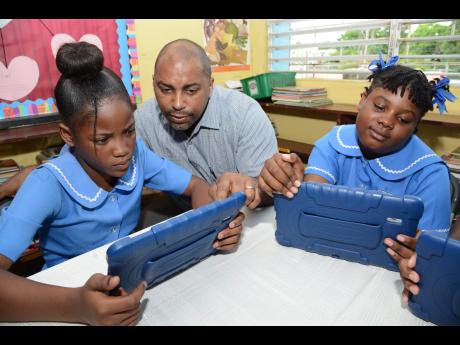 Rudolph Brown
In this 2015 photo, Julian Robinson (centre), then minister of state in the Ministry of Science, Technology, Energy and Mining, is showing Lumaya Fuller (left) and Leonie Facey how to do coding work at the Clan Carthy Primary School.
1
2

The ICT road map: path towards a knowledge based economy

The ICT road map, started in 2012, is an action-oriented portfolio of initiatives, formulated over three distinct time horizons: five years (for long-term objective), three years (the medium term) and 18 months (to address short term priorities). Each initiative is situated in one of the following four major pillars:

- National ICT strategy, policy and legislation: Strengthening the ICT governance and administrative framework through the development and promulgation of key pieces of legislation, supporting policy guidelines and regulatory reform.

- National ICT infrastructure: Continuing to build out Jamaica's infrastructure to facilitate future broadband deployment and to ensure a competitive sector and digital inclusiveness for all our citizens.

- ICT-enabled public sector modernisation: Solidifying the capacity of public institutions and providing the governance framework to deliver efficient and effective public goods and services through the establishment of a more effective government ICT infrastructure and establishing the institutional capability to architect the overarching technology vision and provide leadership in the development and implementation of the Government of Jamaica's ICT strategy and programmes.

Opposition not opposed to a Data Protection Bill

Before going into the specific concerns, I want to make a point on the principle of consultation.

I have no doubt that we will have a stronger, better Data Protection Bill which serves the interests of the country because it was subject to a joint select committee of Parliament. There have been almost 30 submissions and presentations made by individuals and groups. We must always trust the wisdom of the people in all that we do.

The Data Protection Bill, 2017, is a landmark piece of legislation with far-reaching implications for every facet of our society. Indeed, this bill is of profound significance not just for industry, commerce and, more generally, the economy. It is also vital for individuals to an extent that borders on being constitutional.

The fundamental question regarding the ownership of data, particularly personal data, goes to the very heart of this bill. That is the crux of the measures enshrined in the bill because, depending on how this question is answered, we will go in one direction or the other, in our assessment as to the propriety, indeed, the constitutionality, of the bill.

While we support this bill, I must say our support cannot, and will never be that of blind and uninformed support. To do that would be dishonour the oath we took as MPs. The bill as presented by the executive has some gaping holes and I will use my time not only to highlight them, but in keeping with our historical mission, we commend to the House practical and much-needed proposals. It is our hope that members on that side of the House will see the merit in what we are proposing as amendments.

The wide-ranging powers of the Office of the Information Commissioner

The Office of the Information Commissioner is created at Section 4 of the bill and the applicable functions of the commissioner are clearly set out in the said section.

These functions fall under two broad headings, which are general and specific. A clear example of a specific function is that the commissioner can encourage members of trade organisations (attorneys, doctors and chefs, etc) to publish voluntary codes of practice for its members.

An example of a general function is that the commissioner has a duty to promote the observance of the act by all those whose activities are affected by the act.

Those are just two examples of the far-reaching responsibilities that the commissioner has. We on this side of the House take the view that with such great responsibility and with the potential to impact on the lives of every Jamaican, the provisions of section 4(4) of the bill cannot stand.

Section 4(4), which is equivalent to the wording of section 5 of the Contractor General Act and section 94(6) of the Constitution (ODPP), provides in effect that the information commissioner is not answerable to any other institution or person within the Jamaican State.

How do we propose to achieve the necessary balance between independence and accountability? Option one, which is the traditional option, is to impose a mandatory duty on the information commissioner to file annual reports to Parliament, as is required of the public defender, contractor general and other commissions of Parliament.

That would be a step in the correct direction. I say a step in the right direction because the submission of an annual report is only part of the mechanism that should be put in place.

Freedom of expression is a fundamental freedom guaranteed by our Constitution.

Of particular concern is the provision in the bill that could force media personnel to reveal sources of data. That provision is clause 6(2)(c) (ii), which gives the data subject a right to have communicated to him or her "any information available to the data controller as to the source of" the individual's personal data.

I appreciate that the right under clause 6(2)(c) (ii) is not absolute. It is subject to "the exemptions set out in Part V" and, of course, any request made by the data subject for the source of the data is subject to the information commissioner.

Further, publication of journalistic material is (by clause 37 and clause 2(1)) one of "the special purposes" which are expressly exempt from a number of provisions. However, this too is subject to a determination by the commissioner.

In effect, the ability of journalists to protect their sources and, by extension, the integrity and vitality of the press, are placed, by this bill, squarely in the hands of the information commissioner.

I suggest that every three years there be a full parliamentary review of the act resulting from any bill we ultimately pass on data protection. Such a provision exists in respect of the Cybercrimes Act, and given the fast pace at which there are technological developments, there is a need for a built-in review mechanism.

Another pertinent consideration is the time frame for implementing any bill we ultimately pass on data protection. Frankly, an across-the-board 12-month transitional period fails to take account of the nuances.

This particular bill affects everybody: the big, the small and the in-between. Hopping aboard the train will be far easier for the able-bodied and athletic than it will be for the infant, the elderly or the infirm.

The legislative provisions setting out the implementation time frame need to reflect that. We are recommending a 24-month period.

Digital technologies nowadays are key drivers of innovation, growth and job creation in the global economy. Digital literacy has therefore become a prerequisite for creativity, innovation and entrepreneurship and without it, citizens can neither participate fully in society nor acquire the skills and knowledge necessary to live in the 21st century.

Although basic literacy rates in Latin America and the Caribbean are higher than the global average, the gap in digital literacy and skills is a significant barrier to digital inclusion. Digital literacy, therefore, has to become a national imperative if Jamaica and Caribbean societies are to keep pace with global trends and remain competitive in the rapidly evolving digital economy.

In August 2017, the Government closed down the operations of Start Up Jamaica. The closure represented a sad day for the local ICT industry and a reversal of the efforts made to build an entrepreneurial ecosystem, particularly for tech entrepreneurs.

Start Up Jamaica was in the truest sense a start up and had its own birthing and growing pains.

Notwithstanding that, the decision by the Government to close it down is a slap in the face to those young entrepreneurs who were seeking an avenue to turn their ideas into businesses.

Update the Patent Act to monetise the application of ideas

Patents are an essential tool to monetising the application of ideas. While we are seeking to develop our scientific activity, we will not realise the economic benefit from it unless we strengthen the mechanisms for examining and issuing patents, and develop the expertise within the legal system to litigate the defence of patents issued.

These systems raise confidence in the system and increase the chances of attracting investment.

The legislation governing how patents work in Jamaica date back to about 1854 (over 150 years).

Although they still nominally provide protection in Jamaica for the exclusive right to exploit intellectual property (IP) in inventions, there are (at least) two major repercussions of the lack of an update:

The fees for patent applications and maintenance are specified within the act.

Under the PCT, a patent can be examined under a kind of one-stop shop system that reduces the cost of examination and filing in several countries. Jamaica is NOT a signatory to the PCT (but Trinidad is) and as such Jamaican inventors cannot take advantage of this filing system.