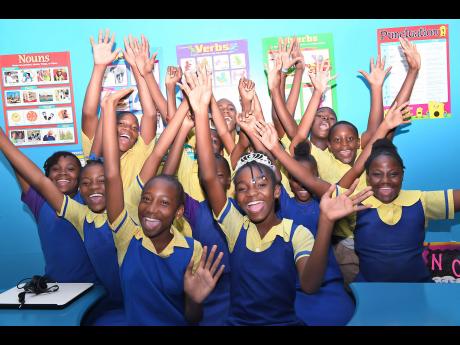 Administrators and students at St Michael's Primary School in central Kingston were punching the sky last week, as they celebrated a record number of passes in the Grade Six Achievement Test (GSAT).

Thirty students of the school sat the exam, and Principal Juliet Campbell-McPherson was ecstatic that 18 of them scored marks high enough to secure spaces in the traditional high schools of their choice.

The accomplishment is a historic feat for the school which sits beside the intimidating Tower Street Adult Correctional Centre, and neighbours a number of volatile communities.

"It is like a dream to me. It doesn't feel real, it's still soaking in," Campbell-McPherson told The Sunday Gleaner.

"We have had so many disappointments as it relates to GSAT passes. We struggled and struggled, and finally we have nothing short of a miracle," added Campbell-McPherson, who said it was the first time in her 24 years at the school that so many students had been placed at top schools.

"We have the passes in duplicates now; it is not a one thing. We have two students going to Ardenne High, two for St Hugh's, we have students going to St George's College, Excelsior and St Andrew High. Those are the top schools and still we have the others," noted Campbell-McPherson.

"We have averages from 80 per cent up to 95 per cent. We have children who got 100 per cent in science. We feel excited, crazy and over the moon. To be able to reach here at this time is a dream come true because as a teacher here we struggle a lot," the principal added.

She argued that greater involvement of some parents in the teaching/learning process could have further improved the passes.

This was endorsed by grade-six teacher Camecia Vassell, who said the high grades reflected the many sacrifices and collaboration by the teachers, the children and their parents.

"It was a journey. We were here seven days a week. We had GSAT camps, sleepovers where we cooked for the children. We got up as early as four o'clock in the morning and we taught until about seven, then they went back to bed for a few hours and we started all over again," said Vassell.

She added: "We did a lot of analyses, and because our school is so small it is very intimate. When the children trust you and you believe in them, you find that they believe in you. Once there is genuine love and they know that you will go the extra mile for them, they will believe in anything that you are selling."

Just over 200 students are now enrolled at St Michael's Primary, which had been underpopulated for decades, barely keeping its doors open with fewer than 100 students, as gangsters in the neighbouring communities engaged in regular bloody feuds.

Since 2014, however, enrolment has seen an uptick, and teachers hope that with continued high passes and parent-involvement, the attendance number will continue on its upward trend.