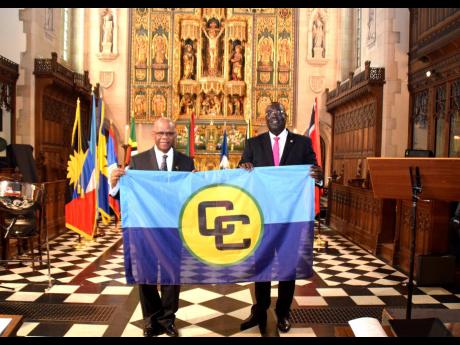 Jamaicas High Commissioner to London, Seth George Ramocan (left), receives the CARICOM Standard from Bocchit Edmond of Haiti, to mark the ceremonial handover of the Chairmanship of the CARICOM Caucus in the United Kingdom (UK). Occasion was a special thanksgiving service to mark CARICOM Day, held at the Holy Trinity Church, Prince Consort Road, London, on Wednesday. 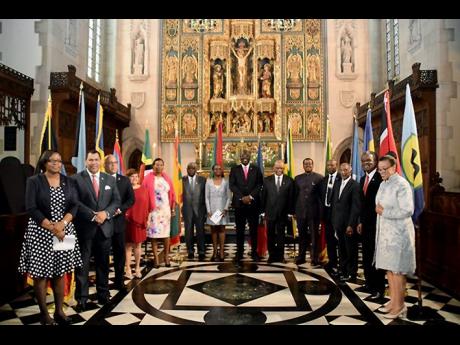 The Caribbean Community (CARICOM) diplomatic missions in London celebrated CARICOM Day on Wednesday, with a special thanksgiving service and exhibition in tribute to the Windrush Generation.

Held at the Holy Trinity Church, Prince Consort Road, the service marked 70 years since the arrival of Caribbean migrants on the Empire Windrush ship to the United Kingdom (UK).

It included a reception featuring samplings of food and drinks from across the Caribbean, and a special presentation by the co-founder of the Windrush Foundation, Arthur Torrington.

An offering was collected towards the Windrush Justice Fund, established by Windrush advocate Patrick Vernon. The fund was set up to assist persons of the Windrush Generation who have been affected by the changes in the UK immigration rules.

The service commenced with the ceremonial handover of the chairmanship of the CARICOM Caucus in the UK to High Commissioner for Jamaica His Excellency Seth George Ramocan by outgoing chair Bocchit Edmond of Haiti.

High Commissioner Ramocan said it was a privilege for Jamaica to be hosting the 39th Conference of Heads of Government of CARICOM from July 4 to 6 in Montego Bay, under the chairmanship of Prime Minister Andrew Holness.

He underscored the relevance and importance of CARICOM in advancing the development goals of the region.

High Commissioner Ramocan read the CARICOM Day Message from Secretary-General Irwin LaRocque, which noted that CARICOM has made strides in many areas in improving the lives of nationals of the region, including in health, education and energy.

Secretary-General LaRoc-que's message further highlighted the longstanding relations between the Caribbean and the UK and noted that the UK-Caribbean forum, which will next be held in 2019, serves as an excellent mechanism for political dialogue on both sides.

He thanked the UK for its solidarity and generosity in assisting the region in the aftermath of the devastating hurricanes, Irma and Maria, that affected the region last year.

The secretary-general also highlighted the importance of having a united voice on critical matters, including the regrettable situation facing the Windrush generation.

Ambassador Edmond praised the strength of CARICOM and said the stance taken by CARICOM high commissioners to defend the rights of the Windrush generation was a great example of what can be achieved through unity.

Senior minister, Restoration Revival Fellowship, the Rev Lloyd Denny, who delivered the sermon, urged the members of the CARICOM Caucus to continue to "use their words" to influence, improve, build and grow.

"Words spoken from a true heart serve as a powerful force," he noted.