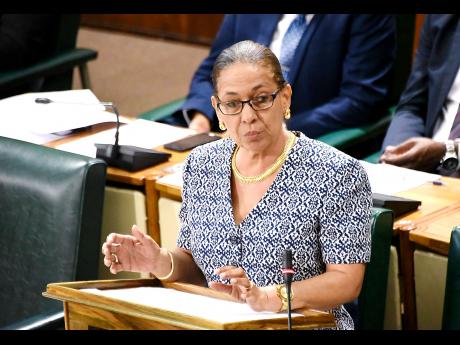 More and more non-unionised workers are having their cases sent to the Industrial Disputes Tribunal (IDT) for arbitration, according to the Ministry of Labour and Social Security. Changes to the Labour Relations and Industrial Disputes Act close to a decade ago, cleared the way for greater access.

"For the period January 2017 to December 2017, sixty-two disputes were referred to the IDT. Of these disputes, 55, or 89 per cent, were non-unionised cases, while only seven, or 11 per cent, were unionised cases. As at August 2018, of the total number of cases sent to the IDT for arbitration, only nine per cent were unionised," said Shahine Robinson, minister of labour and social security. She was addressing a quarterly press briefing held on Tuesday at the ministry's downtown Kingston offices.

Dunstan Bryan, the ministry's acting permanent secretary told The Gleaner: "In the previous dispensation, the persons would have to be part of unions, and the regulations were specific to their participation in the conciliation and the referral to the IDT. With the amendment to the legislation, ordinary citizens - household workers, workers in the retail trade, ordinary citizens - can access the IDT by themselves by representing themselves to the ministry."

The case is then assessed and sent to the IDT based on its merit.

Robinson gave an update on her Sectoral Debate announcement in June that IDT services would be expanded to western Jamaica.

She said: "I am pleased to report that the ministry is finalising the lease agreement for the new facility. By the end of this financial year, workers and employers in western Jamaica will enjoy greater access to [the] IDT's arbitration services."