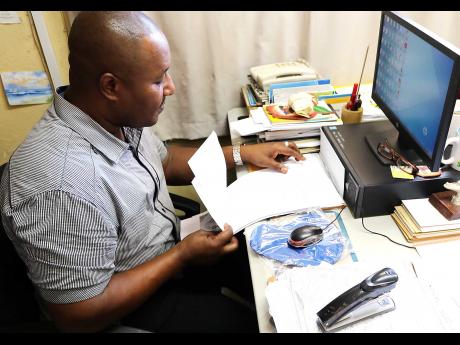 Christopher Serju
Oliver Williams, programmes officer in charge at the Barracks Road, Savanna-la-Mar, office of the Jamaica Foundation for Lifelong Learning, doing administrative duties in the office space provided by the expansion of the facilities by the European Union. 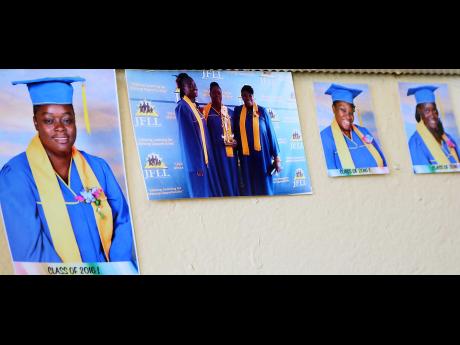 Christopher Serju
The ‘Wall of Fame’ at the Barracks Road Adult Education facility in Savanna-la-Mar, Westmoreland.
1
2

When the Sugar Transformation Unit responded to a call for assistance to expand classroom capacity at the Barracks Road Adult Education facility in Savanna-la-Mar, Westmoreland, administrators at the Jamaica Foundation for Lifelong Learning (JFLL) were very excited.

"What we received from the EU (European Union) was a 60x12 feet room which holds three classrooms. Those three classrooms can each hold about 32 learners, which makes a vast improvement," Oliver Williams, programmes officer in charge, told The Sunday Gleaner.

Following the handover, enrolment jumped to about 230 students, a doubling of the previous population, and with the merger of the JFLL, HEART Trust/NTA and the National Youth Service, the expanded capacity was well-timed.

"It was havoc because in terms of the classrooms, the biggest room could hold about 18 comfortably. The other rooms would hold like 12, and so it was a real challenge. This whole office was one open area, and it is afterwards that with the additional space that we were able to design the computer room," said Oliver.

The new classrooms have freed up space in the old cramped quarters to facilitate a computer lab, which has enhanced the educational offering, as well as allowed for increased administrative/office space.

"In terms of the space and the entire campus, the whole premises is different because having this building, and then we get a second building now makes a vast difference," the programmes officer shared.

The additional space also allows for better one-on-one interaction with the teenagers who attend the morning sessions, most of whom are high-school dropouts and some sent there by the courts because the regular school system was unable to cope with their delinquency.

Adults attend in the evening, most leaving straight from work.

With the scope of lessons offered now extended well beyond the original remedial classes to include the Caribbean Examination Council (CXC), now a prerequisite for most entry-level jobs, the Barracks Road Centre is earning a reputation as an institution of higher learning.

This has helped to dilute the stigma long associated with attendance there.

Upon graduating with five subjects students are awarded the HSED, which Williams said is recognised as entry level qualification to tertiary institutions in Canada and the United States of America, based on a memorandum of understanding with the Jamaican government.

He explained that the latest cohort of adult students is comprised mainly of persons who have three CXC subjects and are going after another two or three in order to earn the diploma.

Williams proudly pointed to pictures of graduates on the 'Wall of Fame' and noted that there were many success stories.

"Recently, at the end of term exam, a lady who could be in her late 50s ... brought her book to show me. For the first time in her life she was able to write here name and address, as well as date of birth.