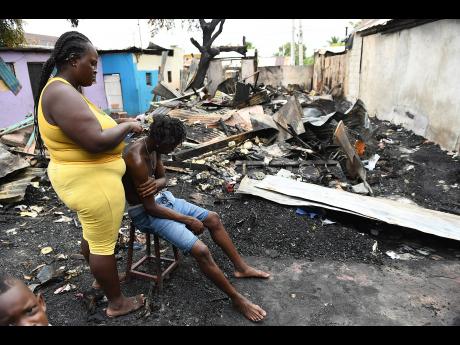 Ricardo Makyn
Kaysia Williams (left) doing the hair of Delano Wright, in the remains of the premises destroyed by fire at 68 and 70 Bond Street in Denham Town.

She identifies herself only as Greta, one of five siblings who grew up at 70 Bond Street, the Denham Town, west Kingston property which was recently destroyed by fire

"My parents were married and had five children together, three girls and two boys. I was the eldest of their children. My father, however, had three other children before he met my mother. There were two boys and a girl. Seventy Bond Street was owned by my mother," Greta told The Sunday Gleaner after reading about the fire which razed the property just over one month ago.

"The property was left to her by her father who we did not know. At Bond Street, it was my maternal grandmother, my parents and their five children," said Greta, as she remembered that the dwelling house at the front of the property housed tenants.

"My earliest memory was my father being a tailor and he used to make some of the best suits using his hands before he graduated to a sewing machine. One of my treasured memories of that time was him teaching me how to make buttonholes by hand, using thread which he waxed before using.

"He used a thimble while sewing and that thimble (a small metal or plastic cap with a closed end, worn to protect the finger and push the needle in sewing) I still have," said Greta.

She described how customers' clothes were washed, cleaned and ironed by hand, using a 'pressing cloth' and the (tailor's iron) which persons had to open and place the coal inside.

Her father graduated to the laundry business garnering a large customer base. As business grew the family moved from the house in front to a new one he built in the back.

"These made the work easier and faster. We all learnt to use the steam pressing machines. One of my dearest memories of this change was that my school uniform pleats were always in place and my friends at school used to ask me how I got my pleats so neat and tidy," Greta recalled.

Her mother was an integral part of the business, helping staff to wash, dry-clean, deal with the customers, and maintain a home.

"As I got older my task was to prepare the weekly wages for the workers. On Saturdays I had breakfast and would go straight to the shop. On Monday mornings when my schoolmates talked about the latest movie they saw at the Carib Theatre, I could only reflect on working in the shop," said Greta.

Being the eldest child had its perks. She received her driver's licence first, and some Sundays she would take her father's Vauxhall Victor 101, and take her siblings for a ride, as far away as St Thomas.

But then the ugliness of politics and political violence reared its head. Her father began losing customers, and even the delivery service stopped entering Denham Town, forcing him to do the deliveries himself. He then tried his hand at a bar which was across the street, but which was also closed, and as the violence escalated the family fled the community.

"We all did not leave at the same time. My mom left first early 1980s for New York as one of my sisters was living there by then. Once she was able, she sent for my other sister and my brothers, and my father was the last to join them. My grandmother stayed behind at the property," said Greta.

"We all returned in 1988 ... because of our grandmother's untimely death. She was returning home from going to the shop when she was caught in crossfire and received a gunshot in her neck. She died on the spot on the sidewalk," she recounted.

The property was later sold to the Government, and three years of trying to get a glimpse of the compound were unsuccessful as she was advised that it was too dangerous to enter Denham Town.

"I feel a deep sense of loss as 70 Bond Street had endless good memories for me. I learnt through my father's business discipline, accounts, treatment of customers, the importance of work, etc. He would always tell us the customers come first. He would also say this is what feeds you, clothes you and sends you to school."

Fire ravaged the premises on Sunday, August 5, leaving the 10 adults and seven children living there homeless.