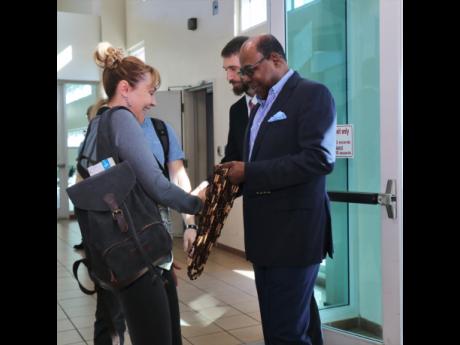 Visa restrictions have been abolished for certain categories of Russians travelling to Jamaica, 48 years after the two countries officially established bilateral relations.

Tourism Minister Edmund Bartlett made the announcement last Friday during a welcome reception for the inaugural Nordwind Airlines flight by Pegas Touristik at the Sangster International Airport.

The historic flight carried the last group of Russians who required visas to enter the country.

"Last month, our government agreed to amend the agreement with your government to waive visa requirements for periods not exceeding 90 days per year. What this means is that coming here as a tourist, or to do business, gives you up to 90 clear days without you having to be concerned about visa requirements," Bartlett told Russian travel agents and crew members at the ceremony.

The flight had some 283 passengers, all spending between 10 days and two weeks in Jamaica. Pegas will operate the flight between Moscow and Jamaica every 10 days up to May 2019, adding approximately 5,400 new tourists to the island's visitor statistics.

Bartlett said Jamaica recognised that even as a lot of weight is given to the safety and security of both Jamaicans and visitors to the island, today's traveller is expecting much more to attract his spending dollar.

The lifting of the visa restrictions, the tourism minister said, was in keeping with the global technology wave which provides access to biometrics, the use of IOT (Internet of things) and facial recognition, which "have made the need for traditional visa regimes less and less important in the world".

According to Bartlett, all the major tourism countries of the world are now using e-visas and technology to facilitate easier access to visa elimination depending, of course, on the nature of the diplomatic arrangements that they have.

"So, we will in fact in time be using a combination of those because visas still remain our methodology by which we can determine who comes to our destination," said Bartlett.

He noted that Russia is not only a new frontier to source visitors for the Caribbean tourism market, but is also the fourth largest market source for visitors to the Dominican Republic, with which Jamaica has established a multi-destination MOU.

This, he said, gives the island access to the growing market of Russian millennials who have a very high purchasing power.

He noted that the Russian authorities played a major role in helping to seal the deal, which resulted in Pegas making Jamaica one of its routes.