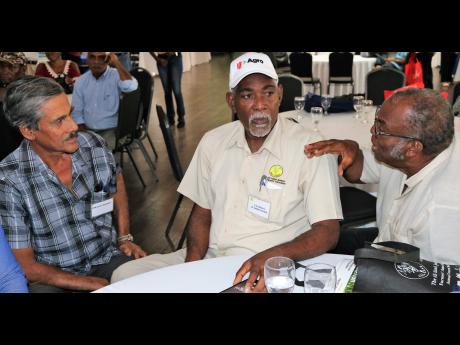 Chairman of the Clarendon Cane Farmers Association Clayton Washington says that his members are bawling out for help.

Pointing to the pending closure of the Monymusk Sugar Factory during a meeting in Lionel Town, Clarendon, last Thursday, Washington said that this will have a devastating effect on cane farmers in the region and they are using all opportunities to draw attention to their plight.

"That being the case, the cane farmers realise that if we don't bawl out, nobody will help us and that is why anybody who will listen to us, or who we think can be a part in lifting, or airing our concerns, we were willing to make use of and hence we are here today," said Washington during the meeting arranged to coincide with a tour of sections of Clarendon by Opposition Leader Dr Peter Phillips and a team from the People's National Party (PNP).

"It's been a long time we've been trying to get the political people together that we can outline our concerns," declared Washington.

He said that the farmers are the only ones who know what it means to them and no one can tell the story of the plight they will face if they no longer have the sugar-cane industry.

Washington said that the Chinese have shown that they have no interest in managing the Monymusk factory. Pan Caribbean Sugar Company Limited has given notice that it will not operate Monymusk factory next year.

"Nothing is happening over there," said Washington as he declared that it is time the farmers to "seek fire for the raw meat".

Citing the negative impact on the business community from the lack of earnings by the cane farmers, Washington warned that it could get worse for several families in Clarendon.

"Parents with three children may have to decide who goes to school and when," declared Washington.

In expressing his concerns for the cane farmers, Phillips told them that the crisis they are facing did not spring up over night.

"The operators of the Monymusk factory indicated, as far back as 2016, that they are going to close the operations of the factory," said Phillips.

He argued that two crops have passed since the Government was made aware of the pending closure and since then, "a so-so chat, talk but no action, promises but no commitment to dealing with the issue".

Phillips added: "This humanitarian crisis that you are facing has been made worse by the failure of the authorities to find a timely and effective response to the crisis that has been caused".

He said that a plan will need to be fashioned for the sugar industry that will involve the operations of factories and the provision of opportunities for local operators.

"I cannot say that we (the PNP) have a definite answer, but I can say our minds are open to any possible answer that will be viable," added Phillips.

Agriculture Minister Audley Shaw had previously announced that the Government is working with Pan Caribbean to facilitate joint ventures with new investors or an outright sale of the factory.

"We are aware that these initiatives might not materialise for the next crop. Therefore, the Government will put in place measures to ensure that the cane grown in that area is processed by Appleton or Worthy Park. Cane farmers can, therefore, employ the necessary agronomic measures to secure the crop for next year," Shaw told Parliament in July.