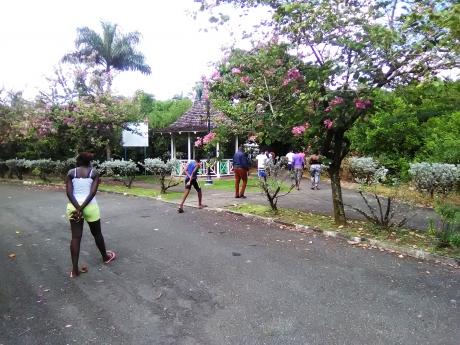 Gareth Davis Snr
Curious residents rush to view the body of the unidentified woman that was dumped at a secluded section of the marina in Port Antonio, Portland this morning.

The Portland police are seeking to identify the body of a woman with the throat slashed and dumped in a river near the marina.

The body, which was partially nude, clad only in a black and red tights, was fished from a river at the Errol Flynn Marina in Port Antonio shortly after 8:30 a.m. by the marine police.

Dozens of residents who gathered on the scene to view the body were unable to identify it.

Detective Inspector in charge of Crime in the Portland Police Division, Linton Bailey, said two police officers on beat duty discovered a trail of blood about 2:45 a.m. and followed it to a footbridge about 50 metres away.

However, Bailey said “the police followed the trail of blood, but due to darkness and poor visibility, they were unable to detect anything".

He continued: “But upon their return at daybreak, they realised that blood was all over the bridge. The marine police combed the mangrove, and the body of a female was found downstream, with what appeared to be stab wounds to the neck and face."

The police have theorised that the woman might have gone to the area with a friend and was later killed and her body dragged and then dump in the river.

The body was found in a dark, secluded area of the marina.

This is the second killing at the West Harbour marina facility. On August 14, 2013, Jessica King was killed by her then boyfriend, Detective Corporal Lincoln McCoy.

McCoy is currently serving a life sentence for the crime.