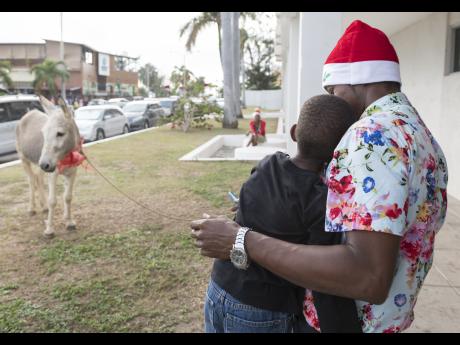 Gladstone Taylor
Marlon Greenwood (right) and his son Marquan, share a father and son moment in proximity to the donkey which Mary and Joseph rode to the Accountant General's Department 'Carols in the City' on the waterfront in downtown Kingston last Friday.

The Early Childhood Commission (ECC) has added its voice to those lobbying for paternity leave to be introduced in Jamaica.

The ECC says that it recognises that children, especially in the early childhood years, need their fathers to achieve maximum social, emotional, and cognitive development.

"Research has shown that children who have an involved father from birth are more likely to be emotionally stable. These children are also self-confident, better able to socialise, and have better educational outcomes as they grow older," said the ECC in a release.

"Paternity leave increases the likelihood of optimal infant feeding. This is defined by the World Health Organization and UNICEF as early initiation of breastfeeding," added the ECC.

The state agency said that it supports the Ministry of Health as it promotes breastfeeding for the first six months, followed by appropriate complementary foods with continued breastfeeding for up to two years.

"Lactating mothers need the support from fathers. A recent research by JA Kids, 2011 revealed that 99.25 per cent of the fathers interviewed believed that breast milk is better than formula while 98.4 per cent believed that breastfeeding creates a special bond with mom.

"Paternity leave will offer an opportunity for fathers to be present in their children's lives, providing the stability needed for optimum development in young children," declared the ECC.

Paternity leave is defined as a job-protected period of vacation for employed men, with income support provided in some cases.

The Government has embarked on discussions regarding the introduction of a Paternity Leave Act to encourage shared parenting, support and mentoring.

Speaking at an International Men's Day forum on November 19, Permanent Secretary in the Ministry of Culture and Gender Denzil Thorpe said that the act would be in line with the recommendations of the National Policy for Gender Equality.