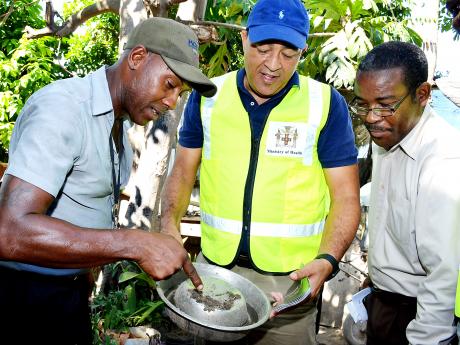 Contributed
Minister of Health Dr Christopher Tufton (centre), along with Larvicidal Worker with the Ministry, Robert Plummer (left) examine a container for the Aedes aegypti mosquito during a tour of the Gregory Park community in St Catherine on Friday. Looking on is chief public health inspector for St Catherine, Grayson Hutchinson. 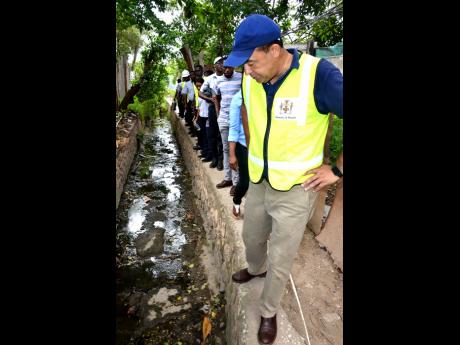 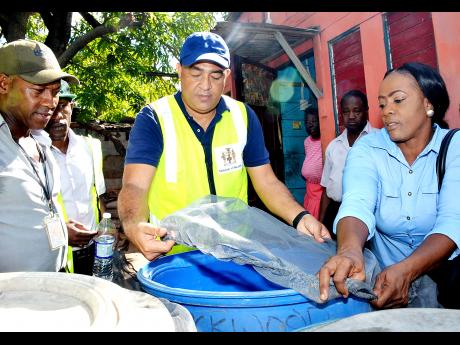 Contributed
Minister of Health Dr Christopher Tufton (second right), is assisted by Joy Brown, councillor, Gregory Park Division, to place a cover on a drum for a resident of the Gregory Park community in St Catherine on Friday (December 28). At left is Larvicidal Worker with the Ministry of Health, Robert Plummer.
1
2
3

Health Minister Dr Christopher Tufton and other officials toured sections of the Gregory Park community in Portmore, St Catherine, which is being targeted as part of increased vector control and surveillance initiatives.

The ministry is reporting that the community has a high population of the Aedes aegypti mosquito, which is the vector for dengue.

During the tour on Friday, December 28, which started at Gregory Park Primary School, Tufton, along with vector control workers, walked along gullies and pathways, and spoke to residents.

The health minister told the media that the tour was primarily focused on preventing new cases of the dengue fever.

"As you know, we have a more active year this year over last year, and we have diagnosed a number of cases in our hospitals.

He noted that the tour in Gregory Park was part of plans to highlight the concerns as manifested in the confirmed or suspected cases, and to bring attention to the residents, the need for them to destroy mosquito-breeding sites.

"For the most part, I think most citizens are doing a good job, supported by the vector control team, but we are still at risk, because the Aedes aegypti mosquitoes are here," he said.

Tufton also urged the residents to seek medical assistance if they show symptoms of being infected with dengue fever.

"Where we are unable to prevent [illness] and symptoms are being displayed, whether in an adult or a child, which means fever, rashes [and] joint pains, we're strongly advising Jamaicans to visit your physician, whether at your health centre, at the hospital or your private doctor, to get a quick diagnosis," he stated.

"If it is suspected by the clinician that dengue is the cause of those symptoms, then there is a particular procedure to be used. Some medications can aggravate the situation and can make it worse," he added.

Symptoms of dengue fever include sudden onset of high fever with severe headache, fatigue, pain behind the eyes, muscle, bone or joint pain, skin rash and vomiting or feeling nauseous.