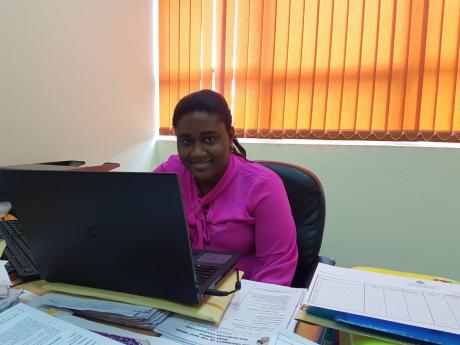 Having executed some groundbreaking work with the Investment Plan for the Caribbean Regional Track of the Pilot Programme for Climate Resilience (PPCR), which is now being implemented by the Mona Office for Research and Innovation, climate data analyst Roxann Stennett-Brown is throwing steady and firm punches in a largely male-dominated ring.

Even as a child, she prided herself on being a human thermometer who could step outside and remarkably guess correctly the temperature in degrees Celsius or Fahrenheit.

It is not unusual for children to live out their career aspirations from the point of discovery, and Stennett-Brown’s intrigue with all things weather and climate held steadfast on her journey to becoming one of the few young women who hold the unpopular title of climate data analyst.

Apart from the Inter-American Development Bank/Climate Investment Funds-funded investment plan for the regional PPCR programme and spending hours at a time combing through up to a hundred years of climate data, the 36-year-old woman plays a huge role in strengthening the Caribbean’s ability to respond to the damaging effects of climate change.

“I am doing work to see what the future climate would look like in terms of temperature and rainfall. Are we going to get more rainfall, less rainfall, or is it both? I also look at the frequency in [extreme] temperature and [project] whether it will be more intense or less intense. I basically project for the future,” she explained, adding that her position affords her the ability to improve and enhance the quality of climate data available to the region in order to support adaptation planning, resilience building, and decision-making in key sectors, including agriculture, health, fisheries and water.

Stennett-Brown continued, “I use my data projections for the future to create vulnerability indices for some of the Caribbean countries. Using socio-economic and demographic data, we do a number of experiments with and without climate data to assess the level of vulnerability to climate impacts (extreme temperature and rainfall, etc) for different locations in the Caribbean.”

Intent on sharing her passion and inspiring other young generations of Caribbean scientists, especially females, Stennett-Brown also lectures in physics at The University of the West Indies.

According to her, “As a female working in this discipline, it is empowering knowing that my country and the Caribbean will be able to make informed decisions on climate change based on the projections from my research.”

As global conversations around climate-change issues deepen, there is an increasing need for more researchers and skill sets to build on climate research and solve the complex problems of climate science. The data analyst is encouraging the younger generation, especially those with an interest in the sciences, to have an open mind about the non-traditional science disciplines.

“My field does have opportunities, but in everything, hard work leads to a profit. If you have a mind to work, then opportunities are always around,” said Stennett-Brown with much reassurance.