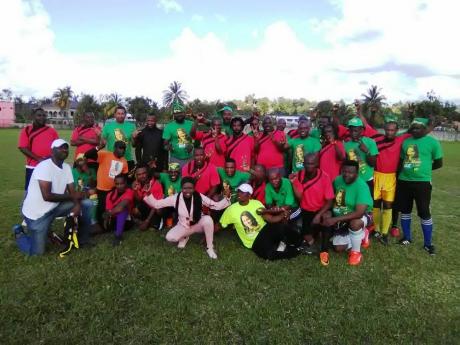 Edmond Campbell
Sports director, Sharon Harris, poses with players from the JLP and PNP during a peace match on Wednesday.

In a show of unity, supporters of the People’s National Party (PNP) and the Jamaica Labour Party (JLP) last Wednesday staged a football match at the Carder Park in Portland.

The game, which was organised by Sharon Harris, a sports director in the parish, also received blessings from JLP candidate Ann-Marie Vaz, and Mikael Phillips of the PNP, who represented Damion Crawford.

“The two candidates, Crawford and Vaz, did not hesitate when I approached them about organising a football game,” said Harris.

“I think this is one way of easing some of the tension and also to indicate to supporters of both parties that the peace can be maintained throughout the constituency. Yes, election is in the air, and I think the best way to bring about good and friendly relations is through sports. I am happy that representatives from the JLP and the PNP are here witnessing this momentous occasion,” she added.

There have been mounting tensions in Portland East since Prime Minister Andrew Holness announced a by-election for the constituency for April 4. Allegations have also surfaced that flags and billboards from both sides of the political divide have been destroyed.

“This is a good way of saying to the people of this constituency that we need to preserve the peace,” said Vaz.

She continued: “It is really nice to see young men on both sides lining up to set an example, and the crowd support is rather encouraging. Can you believe it, Labourite and Comrades engaged in football game? This is a clear indication that we want peace around here. Let us continue our campaign in peace and show respect for everyone.”

And Phillips, who accompanied Vaz to the halfline to kick off the match, agreed that the game was one way of sending the right message that peace was necessary.

“It is a positive signal, as elections come and elections go, “said Phillips.

“But it is always important to focus on oneness, which is a good spirit. I am representing Crawford, and he is all about creating good relations, which should be replicated all around. It could not come at a better time and I am hoping that the peace will be maintained.”

The game, which lasted for 90 minutes, ended 1-1, after the JLP took the lead in the eighth minute, but 20 minutes later, the PNP equalised. A return leg will be played this week at the same venue.