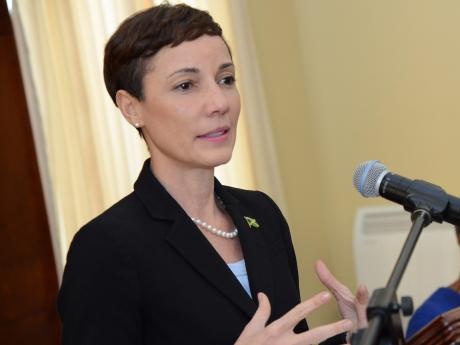 Foreign Affairs and Foreign Trade Minister Kamina Johnson Smith has responded to what she called the “ill-informed and irresponsible” comments made by her opposition counterpart Lisa Hanna regarding the Ministry’s announcement to temporarily close the Jamaican Embassy in Caracas, Venezuela.

The embassy will be closed on April 1.

Hanna had expressed shock at the decision and argued that move appears to halt diplomatic relations with a longstanding ally. “Not only are we eroding our longstanding traditions of remaining objective interlocutors, able to assist with a peaceful resolution of the conflict in Venezuela, but we are setting a dangerous precedent by doing what appears to be the bidding of other powers,” She argued.

But, Johnson Smith has refused the claims.

“In trying to score political points, Hanna has done a great disservice to her country and our foreign service,” she said, adding that Jamaica will always remain friends of the people of Venezuela and wish for them peace and prosperity.

She retorted with a five-point explanation to counter Hanna’s assertion.

2. This is not a sudden decision. We have been having difficulties over an extended period and have advised the public on more than one occasion that we have been monitoring the situation there, in the interest of the staff, as well as other matters especially since the violent protests began in 2017.

3. This is not a decision influenced by political pressure from any other country. It might be helpful for the public to better understand some of the difficulties affecting our ability to effectively operate the Embassy – such as the ability to remit funds to pay salaries of locally recruited staff and to pay for goods and services which form part of the operations of the Embassy. It would shock Jamaicans at how difficult it has been to make simple payments and to maintain proper accounting.

As the responsible Ministry, we have to consider these matters dispassionately. The public should also note daily realities already in the international news. Availability of food and supplies is limited. Some Airlines have ceased operation of flights to Venezuela. Utilities are unreliable, acquisitive crimes are high and foreigners believed to be in possession of money are likely targets, these are not matters of media propaganda - they are real.

4. Several other countries have either closed or scaled down their presence significantly. Barbados had scaled down their staff to one person and that officer left last week. The majority of missions, some far better resourced than Jamaica, have either sent home dependents, or non-essential staff, and some have fully closed.

5. The final point I want to address is the concern expressed about Jamaicans in Venezuela.  While the well being of Jamaicans is always a priority for the Government of Jamaica, the reality is that for some time now, we have had very few requests for consular services – certainly not at a level which could justify the maintenance of a resident Mission, especially in these difficult circumstances.

She said that Jamaicans should know that in the last six months there have only been five queries and one application for citizenship and less than five visa applications.

The last passport application was made in November 2018.

“These matters can be addressed by consular support from other locations including Kingston and the Embassy in Colombia. We use to have 50 Jamaicans registered at the Embassy, but many of them have already left Venezuela and are not in contact with the Embassy or seeking any services. There are two prisoners of which the Embassy is aware,” said Johnson Smith.