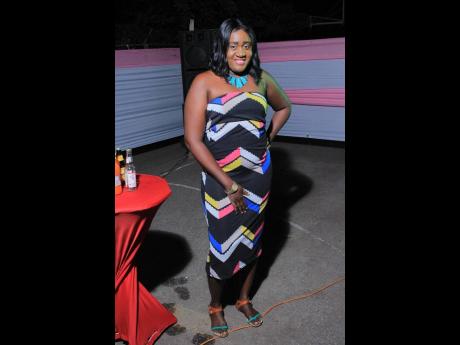 It is often said that if you do what you love, then you will never work a day in your life. This maxim rings true for Tamara Ford, a new caterer and pastry chef operating out of east Kingston.

Ford started catering for events because of her love for cooking. Though she is not formally trained beyond taking a food and nutrition course in high school, Ford boasts that people usually enjoy her food.

“I love to cook from I was small,” Ford said. “I remember the times when I went into my grandmother’s kitchen and cooked out her seasonings, and as I got older, different things would be added to my cooking, and it always turned out good,” Ford said proudly.

She was encouraged by friends to start catering and has been doing so for approximately five years now.

“I am a part of a Whats app group and sometimes, we would come together and just lyme,” Ford said. “I would always cook, and the others always enjoy the food, and one day, one of the members of the group asked me why I don’t do catering full time.”

Ford started catering for parties, and that is where Xcellent Catering was born. The baking component of her company was only added a year ago, and Ford said that it has been a good addition to the business.

“One day, I was at home scrolling through Instagram, and I came upon a page that was selling frozen cakes,” Ford said. “When I called them, they had only one flavour, but the sales rep encouraged me to do my own baking and have different flavours.”

Ford was invited to demonstrations at NTD Ingredientes so she could learn and see that the process of making the cakes was easy. After realising that it was not as difficult as she had thought, Ford agreed to a partnership and received $80,000 worth of goods from the company.

“My first thought after getting the goods was, ‘ how am I going to sell to pay back the people dem money?’ But God was on my side because shortly after that, my friend Trudy was having a cake sale, and I told her I would be selling cakes, and she ordered 10,” Ford said.

Along with the 10 cakes that her friend ordered, another neighbour made orders, so for Ford, God had made a way. However, she did not have the tools suitable for making such a big batch of cakes.

“NTD said they would send a baker to help me and she would have an industrial mixer. Man, I was so happy!” Ford said in recollection. “However, it was during the rainy season, and at 5 p.m., when the orders were needed the next day, the baker told me she was stuck in Negril. I started to pray.”

Ford decided to use social media to find a baker to assist her, and found two people on Facebook. She sent a message to one, and the response was favourable.

“I remember that at 6 in the morning, I rented the mixer from her and that is how I got the orders done on time,” Ford said.

Since then, Ford has bought a mixer of her own and now has one person in her employ.

“I must admit that I don’t like baking because everything has to be precise, and it is not as easily fixed, like with cooking. If a cake is spoiled, you just have to start over. So I am glad that I have someone to help me,” she said.

Xcellent Catering has been a registered business since 2016, operating out of Ford’s east Kingston home. She hopes to have a storefront soon where she can expand her business. In order to stand out from the rest, Ford finds unique flavours of cakes that will appeal to her customers as their satisfation is what she aims for.