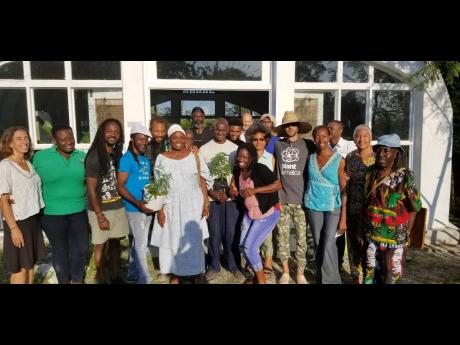 Graduates, special guests and facilitators were all smiles following the graduation ceremony of the first batch of students who took the One One Cocoa Permaculture and Sacramental Course at the Source Farm in Johns Town, St Thomas, recently. 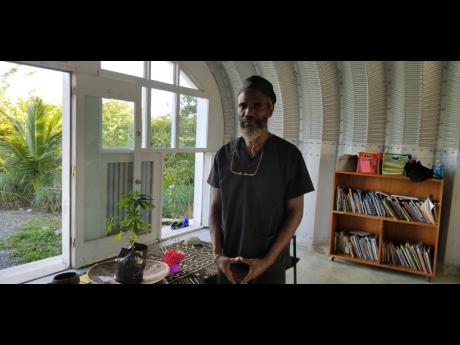 Special guest speaker at the graduation ceremony of the One One Cocoa course, Professor Jahlani Niaah.
1
2

“They say team work is dream work, but when herb is on the team, it becomes supreme work.”

As the trees bowed as if in admiration and reverence for the libation ritual that kick-started the graduation ceremony of the first batch of students who participated in the One One Cocoa Permaculture and Sacramental Course at Source Farm in Johns Town, St Thomas, last Friday, Yoruba Priest Babba Yommi Robinson offered a sacrificial offering to God and his ancestors.

Soon after, the guest speaker for the afternoon, lecturer and researcher at the University of The West Indies, Professor Jahlani Niaah, was introduced to the small group of graduates and facilitators who looked on as he made his opening statements.

As the wind dragged the scent of the glorified herb around the small room, Professor Niaah spoke passionately of the course, referring to it as a “start in the direction towards building a certain kind of future”.

“This space comes in a particular time of global moment, and a global movement that is multifaceted in its appearance and thinking. It holds an energy that is interested in planetary sustainability and doing things in a better way in a time that is necessary for now,” he said.

The professor outlined his belief that ganja is just as political as it is an economic crop.

“By political, I’m saying it’s not just about an ability to plant herb and gain some power by having it financed, but is about our power as individuals. The politics behind ganja is really based on what the herb is – that is a naturally occurring plant with some really wholesome and unique medicinal qualities.

“We have many bushes with medicinal potential, but there is something about this crop that becomes a different kind of medicine. Everyone knows this, and the politics surrounding it over the last hundred years has pretended that if you’re associated with this plant, you are not a desirable citizen. The first thing is that it’s illegal, so you’re immediately a criminal, and there is all kind of negative thinking that don’t allow us to see the evident truth that is in front of us,” Niaah said as he explained that the space in which the herb is held allows those who are associated with it to seem as if they are stepping over a moral line that most people aren’t prepared to cross, even with news of its decriminalisation.

In his address, the guest speaker maintained that over the years, cannabis was withheld from the general population because of its power to transform a regular family into one that could sustain itself.

According to him, “It can provide productive economic options for people at various levels, and unlike what you’re being told now, it doesn’t really require huge investments or huge foreign input or technology. It requires a huge emotional investment … a commitment knowing that this is something for to do in a particular kind of ethical way.

“So with this kind of knowledge, the politics surrounding ganja has insisted that this is a really serious thing, and we can’t allow everyone to be involved in it.”

Pointing out how preposterous this idea is, Niaah spoke about people’s knowledge of other herbal medicinal practices and how these herbs are used with special attention to dosage, preparation and suitability.

“We in this country, and maybe others, have a natural initiation with this herb (ganja), and that’s why it’s never been a big deal despite how them talk. People always smoking them ganja. We know not to put milk in our ganja tea because it will make us too ‘frass’, and so on.

“That level of comfort and familiarity has come from our intimate knowledge through full understanding, and the point is, even how we go about sharing the herb [is admirable]. There is a sort of joy in breaking this ‘bread’, holding a ‘meds’ and contemplating higher thoughts ... nobody is really trying to fall off their chairs.

“We understand that herb, when applied to mental work, produces supernatural results.

“They say teamwork is dream work, but when herb is on the team, it becomes supreme work,” Professor Niaah said.

The One One Cocoa Sacramental Ganja Course happened over a four-week period and enrolled six farmers from all over the world, including Kenya.

Giving an overview of the course, one of the directors at Source Farm, Nicola Shirley-Phillips, said the training began with a lesson in permaculture.

“Permaculture allows them to design landscape because it doesn’t make sense you clear a land space and don’t know how to treat it or what to do with it. So they needed to learn how to design, then implement. The sacramental part is about how to deal with the plant. So students learnt how to extract oil from the ganja, how to make various cooking products with it, and so on, but most of all, they learnt how to properly deal with it in an organic way,” she said.

Shirley-Phillips told The Gleaner that further correspondence will be made with the necessary agencies so that there can be a repeat of the course.

According to her, “Everybody needs to get trained. Not only farmers but doctors, police, lawyers … everybody, because we’ve been told a lot of stuff that isn’t true.”