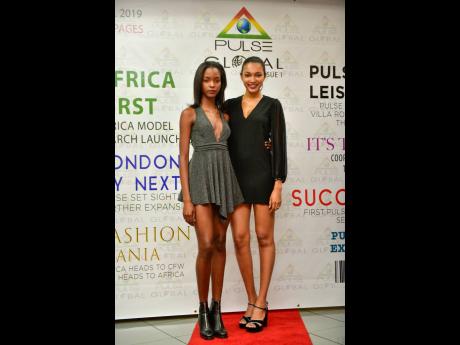 Kingsley Cooper captured his audience with cinematic flair on Tuesday, as he announced the globalisation of the Pulse modelling agency at the Palace Cineplex in the Sovereign Centre.

Since inception in January 1980, almost 40 years ago, Pulse has harboured an ambition to become a global entity. The launch consisted of a keynote speech by the chairman himself, along with co-directors Safia Cooper and Romae Gordon.

“Several years ago, when we created the Pulse logo, we placed a globe in the centre. It was our intention from then to one day become a global entity,” said Cooper as he walked confidently across the stage beneath the screen as he delivered his presentation. “Pulse has pioneered the development of the industry within the region, and so the first step on becoming a global entity is to develop our relationships within the country as well as the Caribbean,” he continued.

Kingsley then stated that while Pulse will not become a global entity overnight, there is now a credible path to accomplishing this in the short to medium term, with the activities constituting the giant step forward. He then fortified this statement with several clips of the companies involvement in their worldwide campaign towards globalisation.

This global movement entails several key components, which include the expansion and deepening in its leadership role, projects, events in fashion, modelling, television programming, and entertainment in Jamaica and the wider Caribbean. The company will also replicate its Caribbean ventures across Africa, working with multimedia and other partners.

Pulse also aims to commence its New York Model search with the aid of TV and multimedia platform partners. The modelling agency will also expand its international model footprint through searches in Africa, the United States, and the Caribbean, including the very successful High School Model Search which has produced 10 likely stars in Jamaica in 2018, said Romae Gordon.

“Pulse also plans to reach out to the public, including industry insiders, encouraging them to visit Jamaica and enjoy the various events and activities taking place here. The Pulse Rooms at Trafalgar and the Pulse Suites at Villa Ronai will play a key role in this regard,” said Safia Cooper.