Diary of a Ghetto Priest | My visit with the prime minister 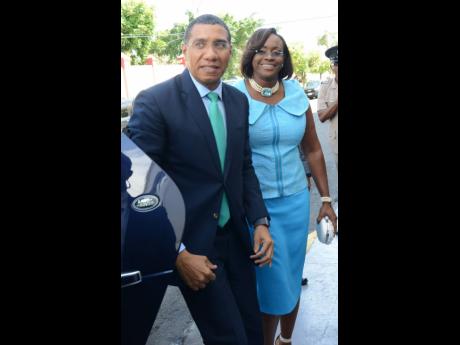 “Yes, Father, the work of MOP with the poor and destitute is a wonderful work. It has changed my perspective on things. It will affect the way I think on matters of the poor and homeless.”

We had lunch together at Sacred Heart Monastery. He and his wife, Juliet, were very gracious, warm, and friendly. Previous to that, our prime minister and family had come to our last National Arena showing of Queen Esther. The leader of the Opposition and former prime minister Portia Simpson had also come to our production. What warm and friendly affection between us!

At that time, the prime minister mentioned: “I am pro-life, Father, except for a few exceptional cases.” I believed him and still do. His sincerity was clear.

His wife, Juliet, is also a woman of deep humanity and kindness. Interacting with our hundreds of homeless and destitute, both were interpersonal with our very poorest and rejected of Jamaican people.

We did not get a chance to further discuss the matter of abortion, but his comment was important.

I write this letter to you sincerely, my prime minister and my people! In the long run, abortion will destroy our nation. In the short run, it will seem to solve some problems. To legalise abortion is to legalise mothers taking the lives of children in their wombs.

The most precious relationship between two people is the mother and her child in the womb. As Mother Teresa said, “There can be no peace in this world as long as there is war on the babies in the mother’s womb.” As a people of truth, we cannot deny the evident. Abortion is the murder of a child!

Changing the law for a few exceptions, in this case, rape, incest, or children who have deformities, would open the door to the most inhuman of acts: the murder of innocent babies. The child conceived in the womb, no matter how young, is human life. You and I have gone through those early stages of life. If our mothers aborted us, we would not be alive now. That is the truth!

We did not ask to be born. The child did not commit any crime. Why punish the child with death? Give it a chance!

Changing the law in exceptional cases is the slippery slope to the murder of babies in the womb and outside the womb.

My prime minister and people, we have seen the way the abortion law has developed. The change of the law began with the child being eliminated in the first trimester – the first three months. Then a few years later, it was changed to the second trimester – six months after conception. Then it was extended to the third trimester after nine months. In many countries, such as the United States, Europe, China, and Canada, abortion has been legalised up to the date of birth.

It will also be open to the poor, middle class, and rich to murder their children in acts of inconvenience under the guise of women’s rights. There is a figure that indicates that only .05 per cent of abortions are such exceptional cases; 99.95 per cent are abortions done in inconvenience, by far the majority of cases.

We also should know that exceptions should not change the law. For such cases, maybe wise and prudent judgement should be made to treat such cases.

I do not believe in judgement and condemnation of anyone. No pro-life person should judge or condemn anyone.

But right is right and wrong is wrong in the eyes of the Lord. We know that in our inner selves. Do we believe that the Lord would say to a woman, I want you to abort your child? Is it a woman’s right, or is it the will of God that really matters?

Mr Prime Minister and my Jamaican people, DO NOT LEGALISE ABORTION!

Do not change the law, but in all cases, be compassionate.

Father Richard Ho Lung is foun­der of the Missionaries of the Poor charity. Email feedback to columns@gleanerjm.com.