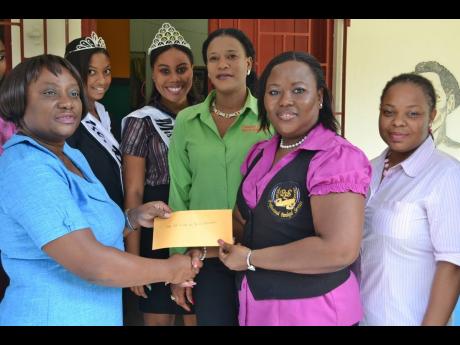 Contributed
This 2013 photo shows Janet Hardie-Lawrence (third right) looking on during a presentation of a donation to the Edge Hill School of Special Education in St Ann’s Bay after she had staged a beauty pageant to raise funds to assist the school. 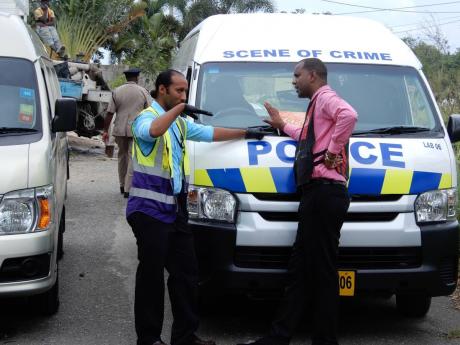 PHOTO BY CARL GILCHRIST
Police personnel in discussion outside Janet Hardie-Lawrence’s Tower Isle home in St Mary, where she was killed yesterday. 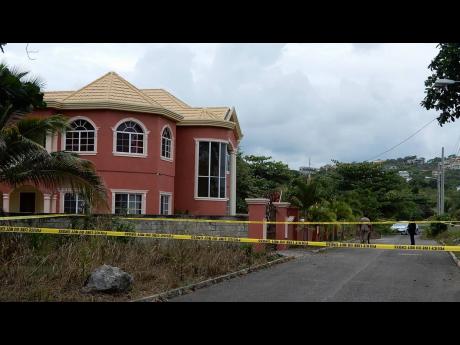 Love turned deadly in Tower Isle, St Mary, at about 6:30 yesterday morning when a businesswoman was shot dead, allegedly by her policeman husband, sending relatives and an entire community into mourning with more questions than answers hanging in the air.

“She a mi basket. She is everything to me. An’ she tek this damn wicked policeman an’ she deh wid him fi years an’ a long time she a suffer wid him and she wouldn’t leave until him kill har,” Stephenson said as she wailed.

Describing Hardie-Lawrence as a “hard-working, 45-year-old young woman”, Stephenson said it was her daughter’s drive to succeed which endeared her most to her relatives and the community at large.

“Mi daughter go through hell. Mi daughter have a son missing from him a five years old an’ a struggle an’ a gwaan an’ God help her,” she said.

Hardie-Lawrence’s search for her missing son had been chronicled on the pages of THE STAR over the years, after the then infant, Rojay King, went missing on a trip to a beach in St Ann.

She was well known in Tower Isle, having staged several pageants and sponsoring events over the years. She has also been known to support charitable causes in St Ann, including making donations to the Edge Hill School of Special Education.

A role model to the community, Hardie-Lawrence started out selling items on a small stall before overcoming challenges over the years to become a successful businesswoman, opening the store Cabotine de Cres Boutique in St Ann’s Bay, before eventually owning the plaza on which the store is located.

“As a young woman growing up, she was one of my biggest role models,” a resident told The Gleaner yesterday. “Everything that she owns, we watched her grow from a stall to a big business. Growing up as a teenager, sometimes we need clothes, we go to her store and she would give us a suit for the Christmas.

“It’s a shock to everybody. She fight fi everything she have. Now is the time fi enjoy it. She nuh bad mind, she nuh grudgeful. Mi remember when my madda dead, a she sponsor everything fi di dead yaad,” the young women related.

“This is not a man. He is a monster!” she said of the alleged attacker.

Yesterday, residents discussed the couple’s tumultuous relationship, about which Hardie-Lawrence herself had spoken guardedly during her STAR interviews.

Onlookers said Hardie-Lawrence had tried unsuccessfully to get the accused out of her house but he refused, allegedly demanding $25 million to leave.

They also questioned whether there was negligence in the authorities not confiscating the policeman’s firearm, stating that over the two days leading up to yesterday’s events, the police had visited the home, allegedly based on reports concerning the mental state of the cop.

Still, community members are hoping justice will be served, even as the harbour thoughts that he could be freed of the charges.

“Mi know him a go get weh because a so police tan. Police wicked and thief an’ when dem come see yuh wid wha yuh have, dem grudge yuh fah but a lef’ dem to time,” the grieving Stephenson said as she mourned her daughter.

However, Deputy Superi-ntendent Gary Flash gave the assurance that the matter would be thoroughly probed.

“We are currently conducting an investigation into an alleged case of murder. We can’t give out any information now, but I can tell you that a police officer was involved. As soon as we are clear, we will update you further,” Flash told The Gleaner.

The accused is in police custody.