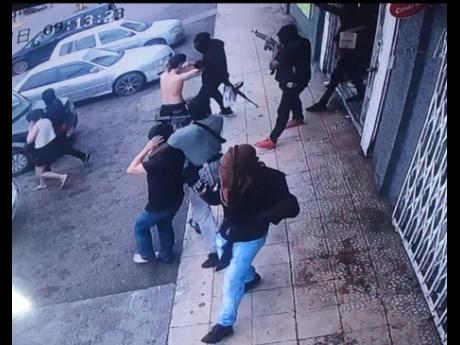 A screen grab of footage taken from closed-circuit footage of the May Pen supermarket robbery and attack on Sunday.

One of the cops injured in Sunday's daring daylight robbery in May Pen, Clarendon, has recounted the horrifying events in which he nearly lost his life.

The sergeant, who was shot in the abdomen and leg, said he would not have survived without the help of his colleagues.

"I told my colleagues to gwaan leave me, but they said they not leaving," he said, sharing that he was with two other policemen when the shooting began.

It is reported that minutes after 9 a.m., two vehicles carrying several gunmen were seen at a supermarket in Guinep Tree along Main Street, May Pen.

The sergeant estimated that he was on the ground for between 15 and 20 minutes, waiting for help.

"Another police brave it now, and turn on the M-16," he said, as he related how his colleague sought to repel the gunmen in order to save him.

Read full story in today’s edition of The STAR