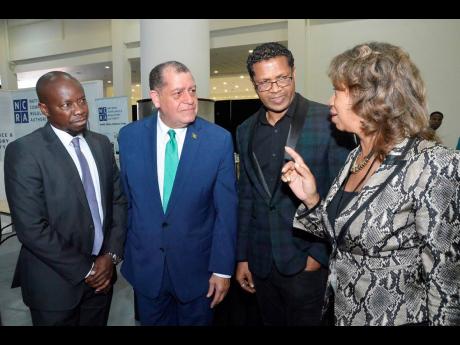 Albert Ferguson
Diane Edwards (right), president of JAMPRO, has the rapt attention of (from left) Ian Mitchell, director of the Trinidad and Tobago Manufacturers’ Association; Audley Shaw, minister of industry, commerce, agriculture and fisheries; and Richard Pandohie, CEO of Seprod, at yesterday’s official opening of the Jamaica International Exhibition at the Montego Bay Convention Centre in St James.

Small businesses still face financing and export barriers that stifle access to capital and slow down trade, putting them at a competitive disadvantage against larger players, says Brian Pengelley, immediate past president of the Jamaica Manufacturers and Exporters Association (JMEA).

Pengelley was addressing concerns and possibilities for small businesses a day ahead of the opening of the 2019 Jamaica International Exhibition (JIE) at the Montego Bay Convention Centre, which runs from May 30 through June 1.

“We are not getting any interest rate like some in the business process outsourcing and the tourism sectors are getting, and our president has been arguing all along that we should be entitled to the same sort of treatment if we are going after growth,” said Pengelley, citing inequity in the loan market.

He said the JMEA has been lobbying the Government to make funds available to the sector at five per cent, noting that potential suitors would not enter the market at interest rates ranging from eight to 10 per cent.

Pengelley also lamented the bureacracy that hobbled export, arguing that the process was “complex” and anti-business.

“We have been saying we have to reduce the bureaucracy and the duplication of steps to import, which has been going on for far too long. We also have to become a lot more competitive, even in the region,” said Pengelley.

The former JMEA head also said that the costs of production were prohibitive compared to regional trading partners.

The association has been in dialogue with the ministry, said Pengelley, noting, however, that even though those talks have been received, action has been lacking while “Rome is burning”.

“We need to get these things done. We have done a lot of talk in this country. We are a little lax on the implementation side. We only need someone to say, ‘Let’s clear these roadblocks and let’s address this’,” he told The Gleaner

Meanwhile, Floyd Green, minister of state in the Ministry of Industry, Commerce, Agriculture and Fisheries, said that the Government understood the plight of small business operators who had difficulties accessing capital at low interest rates.

“What I can say at this time is that the Government is moving in that direction. We have a new facility that we are going to be putting out through the EXIM Bank. I am very sure that we will be aligning our interest rates with what the sector has been asking for,” Green stated.

JAMPRO President Diane Edwards is encouraging buyers and exhibitors to participate in the event, which provides a platform for crucial linkages with partners across multiple sectors.

JAMPRO has secured approximately 182 buyers for this year’s event, 83 of which are international buyers primarily based in the United States, Canada, and the Caribbean. The remaining buyers are from local distributors and wholesalers.

The rise in international buyers represents a more than 100 per cent increase since 2017, when 40 buyers attended.

“You will notice that there is a great demand for Jamaican fresh produce and agro-processed foods,” said Edwards. “[Fifty-four] per cent of the buyers attending are looking for produce in that group. There is also significant interest for our natural and organic-based cosmetics and haircare products, including castor oil,” said Edwards.

She added that following on the success of the JIE in 2017, JAMPRO is happy to work again with the JMEA to encourage export and business partnerships at the trade exhibition.